Welcome to the final show. Harry Styles topped off his historic 15-night run at New York’s Madison Square Garden with a triumphant closing-night blowout. To celebrate, the Garden raised a banner to the rafters commemorating his record-setting run of 15 sold-out shows, a month after Harry began his “Love on Tour” residency on Aug. 20. It was a night to celebrate — the Garden made sure each seat had its own feather boa, officially marking the arena as Harry’s House.

Gayle King presented Styles with his banner in a surprise ceremony during the encore, right after he sang “Sign of the Times.” King told him, “Harry, we don’t want to say goodnight to you.” Then Styles stood watching as the banner was hoisted, slowly and dramatically, to the delight of the crowd.

He wept openly, taking a tissue from a fan near the catwalk. His voice cracking, he told the crowd, “Any time that you come to Madison Square Garden and you see that, remember it’s because of you. That is ours.”

He added, “I’m gonna come back when everyone is gone, and just sit and look at that for a while.”

Styles is now the third music artist to have a banner hanging in the Garden rafters. Billy Joel has two of them — one for his 129 shows there, and another for the 83 shows of his long-running (and ever-amazing) monthly residency. Joel did two Garden gigs during Styles’ run — at the first, on Aug. 24, his opening words to the crowd were, “I’d like to thank Harry Styles for taking a night off.” 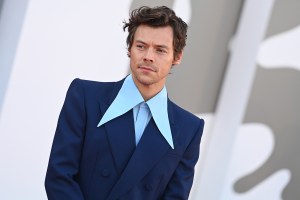 Phish got their banner in 2017, after their record-setting Baker’s Dozen stay, where they didn’t repeat a song for 13 sold-out nights in a row. Let’s hope Phish get to keep their banner, even if their record’s gotten Aaron Judged into second place. Most of the banners commemorate Garden sport legends like Clyde Frazier, Patrick Ewing, Bill Bradley, and Mark Messier.

It’s been a historic run all the way around — for one thing, “And It Was” is STILL the No. 1 hit on Billboard’s Hot 100. When he started, “As It Was” already had shown remarkable staying power at the top — but this is ridiculous. The song is currently in its 14th week at No. 1, tying for the fourth-longest run ever. (Lil Nas X holds the record with “Old Town Road,” which reigned 19 weeks.) So it feels like a coronation moment for the whole Harry’s House phenomenon.

Each of the Garden shows (I saw half of them) had its own unique vibe. Night 2 had the deepest “Sign of the Times,” Night 13 had the saddest “Matilda,” Night 8 had the pranciest “As It Was.” The opening weekend was the most festive; the week after the Venice Film Festival was the most hyperactive, as if getting away from the red carpets and back in front of his people was like escaping a cage. Favorite fan signs of the residency: “Lucky Chris Pine,” “Can I Be Your Caddy, Daddy?,” “My Parents Don’t Know I Left The Country,” and “Bitch For Mitch.” Most depressing fan sign, from last night: “I Found Out Today My Cat Has Cancer.” As Harry admitted, “I’m not gonna lie, not quite what I was looking for in a sign, but we’ll go with it.”

The banner ceremony was an emotional climax to an emotional closing night. For “Matilda,” Harry brought out Blood Orange’s Dev Hynes, who opened all 15 shows. Styles said, “In my opinion he is one of the most important musicians, artists, of our generation.” Hynes played cello, adding extra punch to the raw ballad. Blood Orange just dropped the excellent Four Songs EP last week, with live highlights like “Wish,” as well as CDs of each night’s live show.

Harry also surprised everyone with “Ever Since New York,” a highlight of his first solo tour that he hasn’t done live in four years—as he said, “a bit of an old one.” He got more jubilant than ever in the glorious disco interlude, with “Music For A Sushi Restaurant,” “Treat People With Kindness,” and “What Makes You Beautiful.”

Other artists have done stellar Garden shows during the residency, like Roxy Music, Karol G, Duran Duran, or Pearl Jam, while Styles has taken off for film events to promote his upcoming movies Don’t Worry Darling and My Policeman. One of the funniest moments at the Garden came at the Sept. 7 show, right after his Venice weekend. “It’s wonderful, wonderful, wonderful to be back in New York,” he said that night. “I just popped very quickly to Venice to spit on Chris Pine.”

But the final night was a knockout, even by his standards. It was a cathartic and dramatic climax to his epic run. Like all his Garden shows, it began with the combination of Bill Evans’ jazz-piano meditation “Peace Piece” and a clip of Buddhist scholar Alan Watts saying, “This sensation of being a separate lonely individual is a hallucination.” Styles and his band lived up to that communal spirit all night — and for the whole Garden residency.