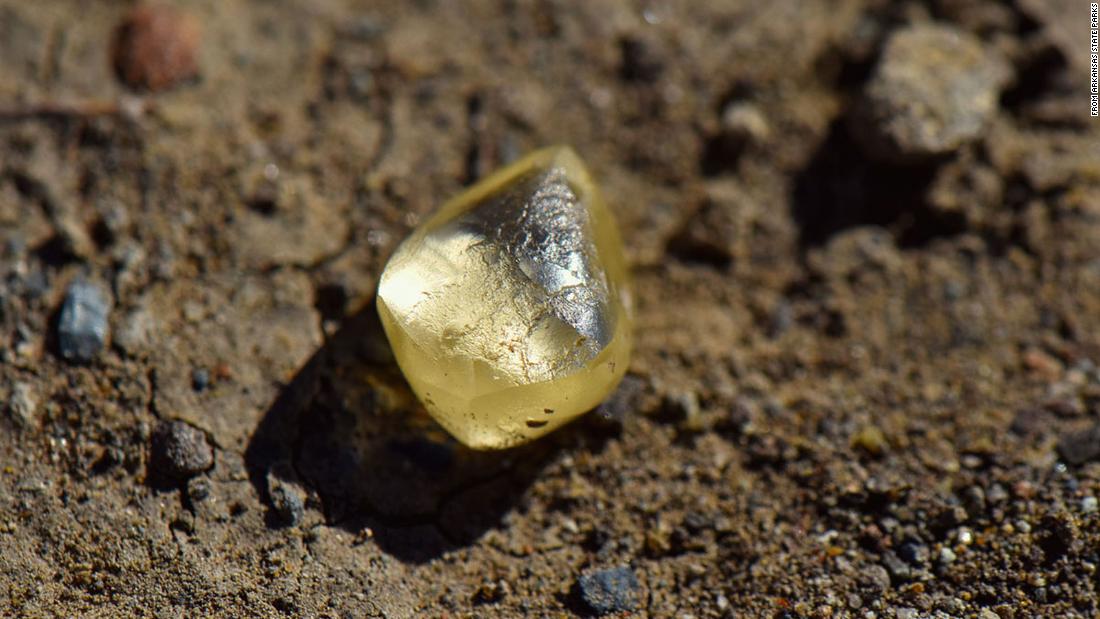 (CNN) — Noreen Wredberg and her husband, Michael, weren’t really expecting to find anything at Arkansas’ Crater of Diamonds State Park, she said, and she wasn’t sure what she had found when she picked up a stone.

Turns out, it was a yellow diamond weighing 4.38 carats.

“I didn’t know it was a diamond then, but it was clean and shiny, so I picked it up,” Wredberg said, according to a news release from the park.

The diamond is “about the size of a jellybean, with a pear shape and a lemonade color,” Park Superintendent Caleb Howell said.

“When I first saw this diamond under the microscope, I thought, ‘Wow, what a beautiful shape and color,'” Howell said in the release.

The park allows visitors to keep what they find, and more than 75,000 diamonds have been discovered there since 1906, according to the park.

This year, 258 diamonds have been registered at the park, about one or two a day, weighing in all more than 46 carats.

Wredberg’s diamond is the largest found since then, the park said.

Some people never find any, but Park Interpreter Waymon Cox said conditions were perfect for searching when the Wredbergs, from Granite Bay, California, decided to try for the fun of it, since they were nearby at nearby Hot Springs National Park. Wredberg found hers in less than an hour.

It had rained in the days before the couple visited. Then the sun was out on the day they were there, September 23.

“When rain uncovers a larger diamond and the sun comes out, its reflective surface is often easy to see,” Cox said.

It’s not clear what the diamond is worth. The park said it doesn’t do appraisals. A 3.03-carat diamond found in the park in 1990 was later cut into a 1.09 carat with a round shape and set into a gold ring. The park later bought the ring for $34,000 in donations, and it is on display at the visitor center.