The week in 43 photos 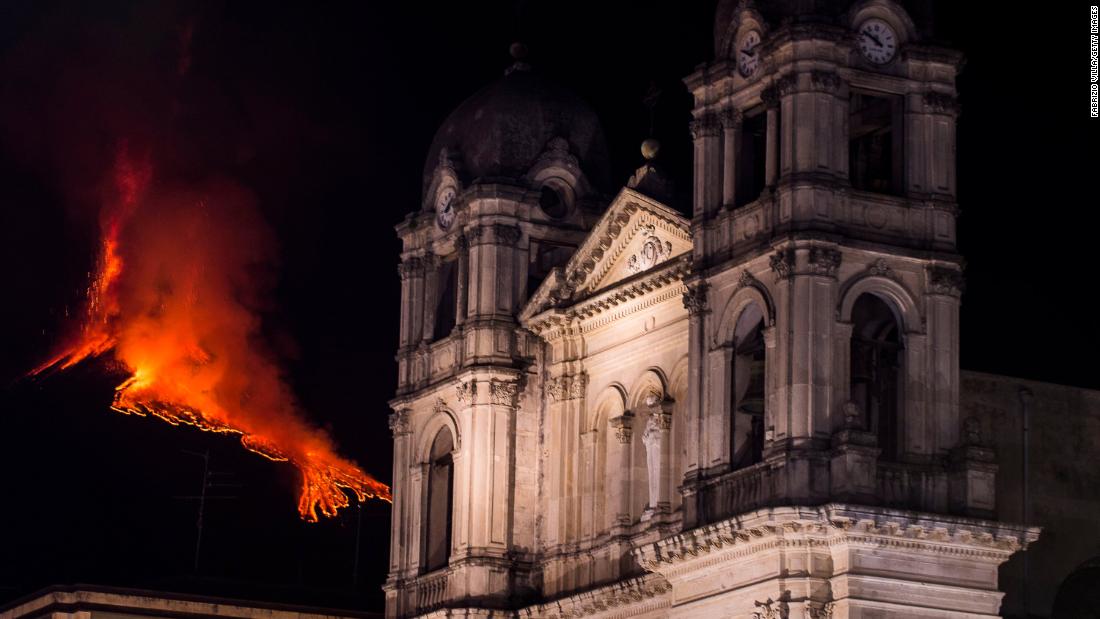 Law enforcement officers investigate the scene of Tiger Woods’ rollover crash in Rancho Palos Verdes, California, on Tuesday, February 23. The golf icon sustained serious leg injuries in the accident. Wally Skalij/Los Angeles Times/Shutterstock
Members of Congress observe a moment of silence on the steps of the US Capitol on Tuesday, February 23. More than 500,000 Americans have now lost their lives to Covid-19. Al Drago/Getty Images
A United Airlines passenger jet flies over Denver with its starboard engine on fire on Saturday, February 20. The engine failed minutes into the flight. It was able to land safely, but it left a mile of debris in its wake. Hayden A. Smith

US President Joe Biden gestures to Canadian Prime Minister Justin Trudeau at the end of their virtual bilateral meeting on Tuesday, February 23. Because of the coronavirus, visits from foreign leaders are still off-limits at the White House. Jonathan Ernst/Reuters
Perseverance, NASA’s most sophisticated rover to date, is photographed just before its wheels touched down on Mars on Thursday, February 18. JPL-Caltech/NASA

Merrick Garland, President Joe Biden’s nominee for attorney general, is sworn in at his confirmation hearing in Washington, DC, on Monday, February 22. Garland was praised by Republicans and Democrats alike in his testimony, where he faced questions about the politically charged investigations that await him if confirmed to lead the Justice Department. Al Drago/Pool/AP
A hospital staff member lifts his shirt sleeve as he prepares to get an Ebola vaccine in N’Zerekore, Guinea, on Wednesday, February 24. The West African nation declared an Ebola outbreak in one of its regions earlier this month. Carol Valde/AFP/Getty Images
People protest agricultural reforms during a rally in Barnala, India, on Sunday, February 21. Farmers say the new laws could destroy their livelihoods. Danish Siddiqui/Reuters

A man holds a golden eagle during the Salburun hunting festival in Tuura-Suu, Kyrgyzstan, on Tuesday, February 23. Vladimir Voronin/AP

Sunlight hits the Horsetail Fall at California’s Yosemite National Park on Wednesday, February 24. The light makes it look as though lava is flowing over the cliff instead of water. Shutterstock
Novak Djokovic falls as he celebrates his Australian Open championship on Sunday, February 21. Djokovic defeated Daniil Medvedev in straight sets to clinch his ninth Australian Open title and his 18th grand slam. He is now two behind the all-time record of 20 held by Roger Federer and Rafael Nadal. Andy Brownbill/AP
Britain’s Prince Charles leaves a London hospital by car after visiting his father, Prince Philip, on Saturday, February 20. Philip, the 99-year-old husband of Queen Elizabeth II, is being treated for an infection, according to Buckingham Palace. Alberto Pezzali/AP
A candlelight vigil is held for Ahmaud Arbery in Brunswick, Georgia, on Tuesday, February 23. It was the one-year anniversary of his fatal shooting. Arbery’s father, Marcus, is at the bottom center. Stephen B. Morton/AP

Scientists examine the body of a dead fin whale that washed up in Nitzanim, Israel, on Sunday, February 21. Amir Levy/Getty Images

A man looks upon the Rio Grande while waiting to show his immigration documents to US immigration officers in Matamoros, Mexico, on Tuesday, February 23. A tent camp in Matamoros, where hundreds of migrants stayed in deplorable conditions after being subject to a Trump-era policy requiring they stay in Mexico until their immigration court date in the United States, is being drawn down, the Department of Homeland Security announced on Wednesday. John Moore/Getty Images

Steven Sund, the former chief of the US Capitol Police, testifies Tuesday, February 23, during a Senate hearing about last month’s Capitol riot. Lawmakers grilled Sund and other former officials who were responsible for Capitol security when the riot took place. Andrew Harnik/Pool/Getty Images
Skipper, a border collie and Australian shepherd mix, was born with six legs during a snowstorm in Oklahoma. The puppy’s photo was posted on the Facebook page of the Neel Veterinary Hospital on Sunday, February 21. Dr. Tina Neel said Skipper was likely part of a twin in utero, “and when the fertilized egg tried to split, it didn’t fully separate,” she told CNN. Katy Hawkins/Neel Veterinary Hospital

Rory McIlroy tosses his club after a tee shot at the Genesis Invitational on Thursday, February 18. Steph Chambers/Getty Images

US Sen. Joe Manchin greets US Rep. Deb Haaland, President Joe Biden’s nominee for interior secretary, at her confirmation hearings on Tuesday, February 23. Manchin, a key moderate Democrat who is chairman of the Energy and Natural Resources Committee, later announced that he would vote to confirm Haaland, giving her nomination a boost. If confirmed by the Senate, she would be the first Native American Cabinet secretary. Jim Watson/Pool/Getty Images

People gather at the site where a Nigerian military plane crashed on its approach to the Abuja airport on Sunday, February 21. Seven people were killed. Afolabi Sotunde/Reuters

Anna, a resident of the Villa Sacra Famiglia Nursing Home, holds her daughter’s hand in the Rome facility’s “hug room” on Wednesday, February 24. The room allows residents and their families to touch one another while staying safe from Covid-19. Antonio Masiello/Getty Images

Protesters march in Rochester, New York, on Tuesday, February 23, after a grand jury voted not to indict any police officers on charges relating to Daniel Prude’s death. Prude, a 41-year-old Black man, was having a mental health episode on March 23 when officers handcuffed him, covered his head with a “spit sock” and held him on the ground in a prone position. Prude was taken to a hospital, declared brain dead and died a week later. Lindsay DeDario/Reuters