How Milford Graves Reawakened the Spirit of the Drum 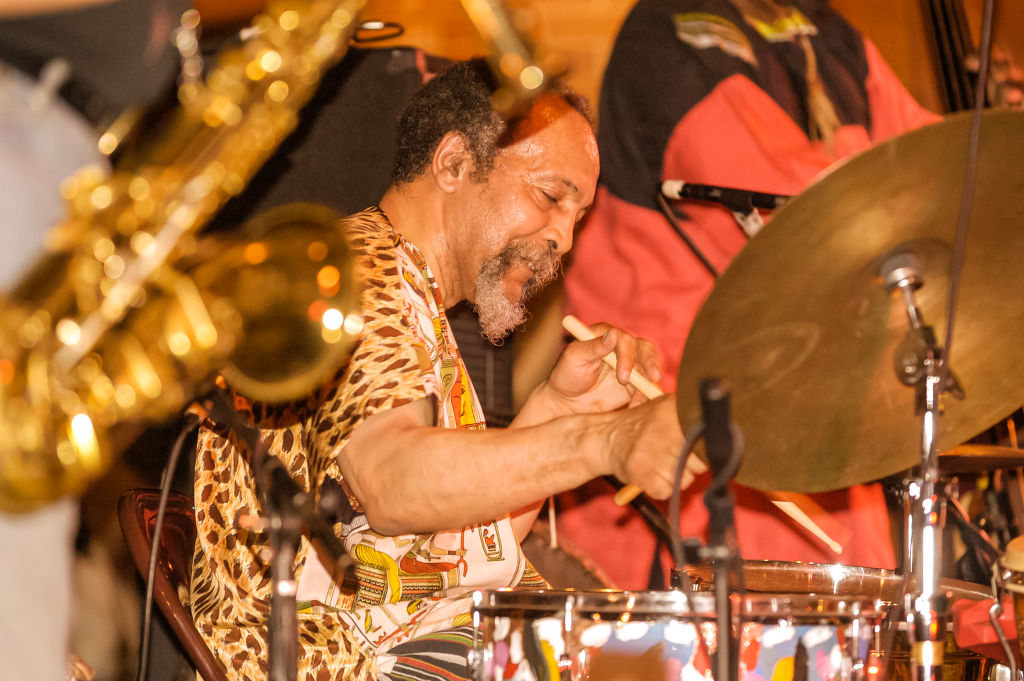 In September of 2008, an unusual performance took place at downtown New York club Le Poisson Rouge. At stage right, opposite fellow six-string adventurer Marc Ribot, sat Lou Reed, conjuring clouds of free-rock energy from his guitar. Behind them, avant-garde mainstay John Zorn sent forth piercing, impassioned blasts of alto sax. And at the center of it all, churning with the fury of a whirlpool and dancing across his hand-painted drum kit with the control and flair of a flamenco master, was Milford Graves — the percussionist, healer, and interdisciplinary seeker who Zorn had once called “basically a 20th-century shaman,” and who died on Friday at 79 after a battle with amyloid cardiomyopathy, NPR confirmed.

“Lou was cool, man,” Graves recalled in 2015, looking back on a then roughly 50-year career in which he’d also worked with jazz liberators Albert Ayler, Sonny Sharrock, and the New York Art Quartet, as well as South African vocal giant Miriam Makeba, and honed one of the most distinctive and arresting drum-set conceptions on the planet, in any genre.

“I think he liked me, because at Le Poisson Rouge, that was the first time I met him, and he looked over to me and said, ‘It’s great for a change playing with a drummer that’s got some rhythm,’ ” he continued with a laugh. “That’s all he said. And I know what that’s about, because other musicians want to be fed too! The worst thing is to be up there playing with some guy that’s just boring.”

“Boring” would be the last descriptor ever used by anyone who ever stepped onstage with Milford Graves — or, for that matter, descended the basement stairs of his Jamaica, Queens home and found themselves in a combination of music studio, apothecary’s storehouse, and DIY cardiac-research facility. His collaborators and admirers ranged from jazz trailblazers like Jason Moran and Steve Coleman to rock-world seekers such as Thurston Moore and current Alice in Chains vocalist William DuVall. “Never before have I encountered anyone so innovative in so many fields of endeavor, every one of them self-taught,” DuVall said of Graves in 2013. “This man possesses sacred ancient knowledge but applies it to cutting edge working methods in a way that could literally change the world.”

Born in 1941 in Queens, where he lived for much of his life, Graves was a contemporary of Reed’s, and only a few years before Reed helped to revolutionize the New York rock scene, Graves had done the same for jazz. (“They told me he was with the old Velvets,” Graves said in 2015, confessing that he’d been unaware of Reed before the two performed together. “I said, ‘Well, who’s the Velvets?’ Totally out of it, man. And we’re in that similar age group, but I didn’t know about that.”)

Graves first made his mark with the New York Art Quartet, a collective including saxophonist John Tchicai, trombonist Roswell Rudd, and sometime guest poet Amiri Baraka, which would reunite some 35 years after its early recordings presented a rousing yet finely honed take on free jazz. Before joining the group, Graves had played African hand drums, and timbales in local Latin-jazz groups, including one band with a then-unknown Chick Corea on piano. When he finally got to the conventional drum set, in 1962, he had to figure out how to bring his feet up to speed with his hands.

“I got on the set and said, ‘Hmmm, this is interesting,’ ” he would later tell Ben Young, producer of a stunning 2013 New York Art Quartet box set. “My feet were dormant on the pedals, weren’t doing any damn thing. But upstairs I was tearing things up; I thought I was playing timbales on the set. … I said, ‘I’m going to work out some stuff to do with these feet.’ ” He drew inspiration from timbale master Tito Puente, the African drumming he’d studied, and the dancing styles he’d grown up with. “You don’t have to calculate what your hi-hat and bass drums are going to do — just dance, and it’ll make sense rhythmically if you’ve got the feeling,” he said. “But: You can’t do it unless you can dance. You’ve got to know all that stuff — jitterbug, lindy hop, dumbbell, and all the rest.”

His unique blend of influences meant that Milford Graves played the drum set like no one else. His fellow Sixties percussion innovators like Sunny Murray, Rashied Ali, and Andrew Cyrille (Graves’ longtime friend and duet partner) all came up through more conventional jazz-drumming channels. But from his earliest recordings on the kit, including a string of albums with leaders including Giuseppi Logan and Paul Bley on foundational avant-jazz label ESP-Disk in 1965 and 1966 that also sometimes featured him playing Indian tabla, Graves was speaking in his own language on the instrument: fluid and fiercely articulate, abstract yet conveying enormous forward drive. As Lou Reed was all those years later, Graves’ collaborators were both taken aback and highly impressed. “Graves simply baffled both Rudd and I in that we, at that time, hadn’t heard anybody of the younger musicians in New York that had that same sense of rhythmic cohesion in polyrhythmic or the same sense of intensity or musicality,” New York Art Quartet saxist Tchicai told Valerie Wilmer in her landmark book As Serious as Your Life.

By the time of The Complete Yale Concert, a recently reissued 1966 duo performance with pianist Don Pullen, he’d honed his mature style, which paired an ever-shifting, hummingbird-like ride-cymbal pulse with a barrage of low end that somehow seemed to caress as much as it battered. As Graves later said, his goal was to free the drums from a rigidity that he saw as a rejection of their true purpose:

“There’s an ethnic problem involved because of slavery and coming up through the New Orleans period,” he told Wilmer. “People completely lost their identity and so what drummers have been playing up to now has little to do with their African makeup.”

In 2015, he explained how drummers might go about reversing this process. “I tell them to throw the metronome and the snare drum away,” he said, referring to the taut drum so central to modern kits but which he had no use for after his early years. “ ‘When are you going to be a musician, man? When are you going to speak on the instrument?’ I mean, it’s a shame. They have taken that drum and resorted it to a timekeeper, a military timekeeper.”

Graves’ performances evolved to include dance, spontaneous vocalizations, even impromptu stories and reminiscences, all having the effect of drawing the listener in, and erasing divisions of style or culture. In the decades after his initial emergence, he continued to play in nominal free jazz settings, working with master improvisers such as David Murray (their gorgeously recorded 1994 duo album Real Deal is one of the best places to hear Graves on record) and Peter Brötzmann. But he also traveled the world, performing in rural Japan and collaborating with Butoh dancer Min Tanaka, and taught music for years at Vermont’s Bennington College.

Meanwhile, at home in Queens, he evolved into the 20th-century shaman that Zorn had described. In Jake Meginsky’s meditative and illuminating 2018 documentary Full Mantis, Graves describes going “full mantis,” in his practice of martial arts — choosing to take his cues from the movements of praying mantises rather than human practitioners. In search for ever-deeper connections across disciplines, he started recording his heartbeat and listening for the music in it. “A lot of it was like free jazz,” Mr. Graves told The New York Times in 2004. “There were rhythms I had only heard in Cuban and Nigerian music.”

He began analyzing and diagnosing heart irregularities in others, and creating a “corrected heartbeat,” which he would play back for them. “Milford is right on the cutting edge of this stuff,” one doctor told the Times. “He brings to it what doctors can’t, because he approaches it as a musician”

He’d been on the cutting edge right until the end. In the past year, as his illness had worsened, he was monitoring his own heart with an ultrasound device he gotten off eBay, even while working with curator Mark Christman on “A Mind-Body Deal,” a magical career-spanning exhibit at Philadelphia’s ICA that was the next best thing to visiting Graves’ basement and conversing with him.

Graves left behind a small but rich discography, from a pair of solo albums released on Zorn’s Tzadik label that play like private rituals to Albert Ayler’s yearning Love Cry, recorded shortly after Graves performed with Ayler at John Coltrane’s funeral. But just like no one musical school or medium of expression could contain him, neither could traditional sonic documentation. As Reed had experienced on that night in 2008, and anyone did who was ever lucky enough to have been in the room when Graves was drumming, he figured out a way to feed the soul of anyone he performed with, dismantling barriers between drumming and dancing, between concert and healing ceremony, and even between musician and instrument.

“You have to start by listening to what’s happening with the instrument itself,” Graves told writer Garth W. Caylor Jr. in a 1965 interview. “The drum is the instrument that has all the things a person needs, but it just hasn’t been played. Drums are much closer because of one thing — drums are made from skin, from flesh, remember, so they have a special form of life … There’s a lot of life in that taut membrane, and it seems that musicians have forgotten about that. That’s what I’m interested in.”