The week in 44 photos 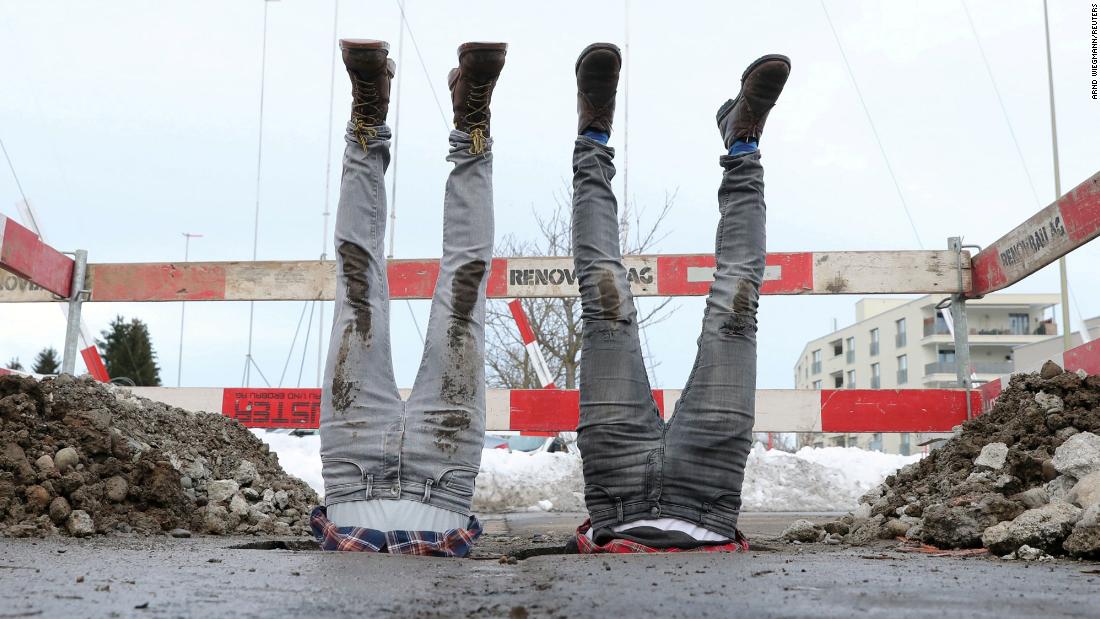 People clash with police in St. Petersburg, Russia, while protesting against the jailing of opposition leader Alexei Navalny on Saturday, January 23. Navalny was detained by police on January 17, five months after he was poisoned with the nerve agent Novichok. He was placed on the country’s federal wanted list last month for violating terms of probation related to a years-old fraud case, which he dismisses as politically motivated. Dmitri Lovetsky/AP
A morgue attendant, right, stands next to the body of a Covid-19 victim in Pretoria, South Africa, on Friday, January 22. Hope stemming from decreasing Covid-19 numbers has been blunted by the spread of new coronavirus variants. One of the most worrisome strains — first found in South Africa — has been detected for the first time in the United States. Marco Longari/AFP/Getty Images
Tampa Bay quarterback Tom Brady celebrates after his team defeated Green Bay on Sunday, January 24, to clinch a spot in the Super Bowl. This will be Brady’s 10th Super Bowl appearance, which is four more than any other player in NFL history. See the greatest Super Bowl records Mark Hoffman/The Milwaukee Journal Sentinel/USA Today Network
US President Joe Biden — flanked by Vice President Kamala Harris and Defense Secretary Lloyd Austin — signs an executive order in the White House Oval Office on Monday, January 25. The order repealed a Trump-era ban on most transgender Americans joining the military. Doug Mills/Pool/Getty Images

More than 1,200 Cape cormorant chicks are seen on Thursday, January 28, after being rescued on South Africa’s Robben Island. Their parents had abandoned them, possibly because of a lack of food. Rodger Bosch/AFP/Getty Images

A soldier wears a face shield while disinfecting a school in Bangkok, Thailand, on Thursday, January 28. Mladen Antonov/AFP/Getty Images

Benfica soccer player Haris Seferovic hides his head under his jersey at the end of a Portuguese league match against Nacional on Monday, January 25. The match in Lisbon ended 1-1. Patricia de Melo/AFP/Getty Images

Patti Herring sobs as she sorts through the remains of her tornado-ravaged home in Fultondale, Alabama, on Tuesday, January 26. A large tornado annihilated parts of Jefferson County, killing at least one person and injuring dozens. Jay Reeves/AP

Betty Nelson reads her tablet in her vehicle while waiting for a Covid-19 vaccine clinic to open in Sequim, Washington, early on Saturday, January 23. Lindsey Wasson/Reuters

Indian badminton player P.V. Sindhu follows through on a shot during a match in Nonthaburi, Thailand, on Thursday, January 28. Shi Tang/Getty Images

Indian farmers are showered with flower petals as they head to New Delhi to protest controversial agricultural reforms on Tuesday, January 26. Some protesters clashed with police and scaled the walls of the historic Red Fort. Anushree Fadnavis/Reuters

Hana Mohsin, right, carries belongings from a neighbor’s home that was damaged in a mudslide in Salinas, California, on Wednesday, January 27. A powerful storm dumped heavy rain and snow on Northern California, triggering mudslides and debris flows. Noah Berger/AP
Adam Dergazarian pays his respects to basketball legend Kobe Bryant and his daughter, Gianna, in front of a mural in Los Angeles on Tuesday, January 26. The Bryants and seven other people were killed in a helicopter crash one year ago. Jae C. Hong/AP
Rescue workers bring a miner up to the surface at the Hushan gold mine in Qixia, China, on Sunday, January 24. An explosion on January 10 trapped 22 workers underground. cnsphoto/Reuters
US Vice President Kamala Harris receives her second dose of the Moderna Covid-19 vaccine on Tuesday, January 26. Brendan Smialowski/AFP/Getty Images

Concept artists Frank and Patrik Riklin perform in Regensdorf, Switzerland, during the presentation of their “Fondation Riklin” project on Friday, January 22. Arnd Wiegmann/Reuters

People dance in a park in Wuhan, China, on Saturday, January 23, a year after the city went into lockdown to curb the spread of Covid-19. Hector Retamal/AFP/Getty Images

A nurse takes care of a Covid-19 patient at a hospital in Pierre-Benite, France, on Monday, January 25. Jeff Pachoud/AFP/Getty Images

People look up at Mount Merapi, Indonesia’s most active volcano, as it spews rocks and ash in Yogyakarta on Wednesday, January 27. Agung Supriyanto/AFP/Getty Images

Motorists line up in the parking lot of Los Angeles’ Dodger Stadium for Covid-19 vaccinations and tests on Wednesday, January 27. Jae C. Hong/AP

A performer dances on a float during the Republic Day parade in New Delhi on Tuesday, January 26. Jewel Samad/AFP/Getty Images

A soldier takes part in the Horse Guards Parade in London on Sunday, January 24. Hannah Mckay/Reuters

Russian President Vladimir Putin, third from left, tours the Victory Museum in Moscow on Wednesday, January 27. It was the 77th anniversary of the lifting of the Nazi siege of Leningrad during World War II. Mikhail Klimentyev/Sputnik/AFP/Getty Images

House Speaker Nancy Pelosi holds her weekly news conference at the US Capitol Visitor Center on Thursday, January 28. She told reporters that she’s committed to addressing the concerns of her colleagues over security, but she said that effort is hampered because “the enemy is within the House of Representatives,” referencing the rhetoric and behavior of some Republican members of Congress. Chip Somodevilla/Getty Images

The sails of the Sydney Opera House are lit up at dawn on Tuesday, January 26. The artwork, “Angwirri” by Frances Belle-Parker, was part of Australia Day celebrations. James D. Morgan/Getty Images

Health workers are seen inside a locked-down portion of Hong Kong to contain a Covid-19 outbreak on Saturday, January 23. Tyrone Siu/Reuters

A priest waits for confessions at the Cathedral of Santiago de Compostela in Spain on Wednesday, January 27. See last week in 44 photos Miguel Riopa/AFP/Getty Images