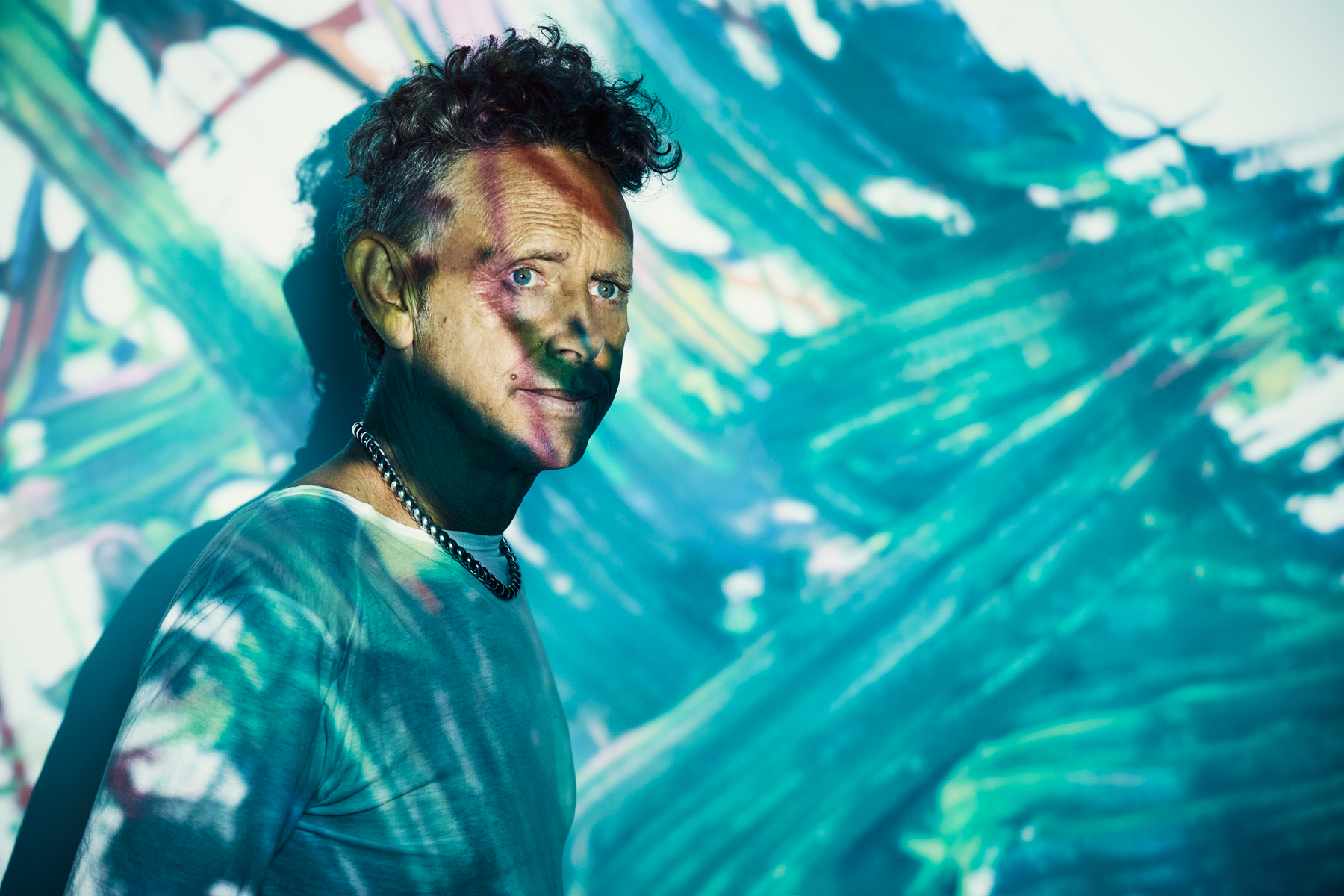 Martin Gore was recently tweaking his voice electronically — “resynthesizing it,” to use his words — for an avant-garde piece when he realized that it now sounded animalistic. The original vocal was “an almost yelling blues kind of line,” he says, but it had started to seem “human-like.”

“It wasn’t quite human anymore,” he tells Rolling Stone on a mid-December call from his home in sunny Santa Barbara, California. “It just reminded me of a different kind of primate. I went down to Costa Rica a bit during normal times, and we often hear the howler [monkeys] down there. The track reminded me a bit of the sound of howling.” So he titled the composition “Howler” and decided that monkey business suits him well.

Out Friday, the Depeche Mode musician and singer’s new solo EP, The Third Chimpanzee, collects five instrumental compositions named for primates — mandrills, capuchins, and vervets among them — all bound by the primitive spirit he evoked with his resynthesized vocals. The recordings are gritty and stark, fuzzy yet cutting. They’re not the hummable, soft-spoken electro-pop songs of his band; instead, they’re an extension of his most recent solo release, 2015’s MG, which also displayed a less commercially accessible side of the musician.

Part of why he decided to explore a different aspect of his art is because he had the time to do so. He had written “Howler” before coronavirus lockdowns went into effect and worked on the rest in isolation in the months since. “I haven’t been leaving the house too much,” he says. “Fortunately for me, I can just go to the studio and work most days. And I usually go, like, five days a week and for about five or six hours, and it helps to keep me sane. If I didn’t have that, I think I would have been in in an institution by now.”

Despite the seriousness of the music and the gravity of the world situation, Gore feels generally upbeat and optimistic. He even paid for a monkey to paint The Third Chimpanzee’s cover. “It’s striking,” he says of the art furnished by a primate named Pockets Warhol. Then he adds with a laugh, “We should put monkeys in charge of a lot of things.”

How did “Howler” inform the rest of the Third Chimpanzee EP?
I think when I was working on “Howler,” the thing I liked about it most was how it had kind of a primal power. That was something that I was quite insistent on keeping throughout the project. I wanted to keep that initial, hair-raising power.

Did you create the songs primarily with synthesizers?
I think that all of these tracks are synth-based; I don’t think I used a guitar on any of them. So it’s vocals, synthesizer, drums. There’s other stuff that I’ve been working on with a completely different aesthetic, and I’ve actually been using guitars a bit on those. But I would say the majority of them are very electronic still.

It’s been 40 years since Depeche Mode formed. What attracted you to electronic instruments in the first place?
Well, I think I must have been about 18, and one of my friends had a synthesizer. He lent it to me for a week, and I just fell in love with it and just loved the different sounds you could make with it. So I bought one. And I think if I hadn’t done that, I probably wouldn’t have been in Depeche Mode, because at the time, Vince [Clarke] and Andy [Fletcher] were just starting a band. And Vince played guitar, and Andy played bass. And when they heard that I had a synthesizer, they asked me to join. So had I not bought it, I might not have made it into the band.

Do you own a lot of synths now or do you maintain a small collection?
No, I have so many synthesizers and pieces of equipment that it’s not funny. I used to say the more stuff you have around you, the more creative you will be. But I passed that tipping point. And now I walk into the studio and I just think, “Oh, God. What should I use today?” It’s overwhelming.

What do you get out of making an instrumental EP like this, as opposed to music with traditional vocals?
You get different things out of them. The moment you put a vocal on a track, it’s obviously the most important thing, and everything has to work around it. If you take that away, everything is equally important, and it’s not like you’re having to worry about something blotting the vocal out and you can’t hear the words anymore. It’s more about the atmosphere and what the what the instrumental conjures, because music is powerful. And it is powerful with or without lyrics. I like working both ways.

You titled the record The Third Chimpanzee as a nod to Jared Diamond’s book The Rise and Fall of the Third Chimpanzee. The third chimp in that title is man. What are you saying with your title?
After naming all of the tracks after monkeys, I wanted to blur the lines between monkeys and humans. I think sometimes we put ourselves on a pedestal and think that we’re so much better [than animals]. And there are so many things that we do so badly. Maybe we’re better off putting monkeys in charge. And then I thought it was a great idea as well to get a monkey to do the artwork and blur the lines even more.

The cover art is by a monkey named Pockets Warhol. How did you get turned onto monkey art?
The idea came to me one night when I was laying in bed and I remembered reading about monkeys that paint. “That would be a great idea for the artwork.” So I went down that rabbit hole googling and managed to come across Pockets Warhol and found the sanctuary where he lives up in Canada. So the next day, I just sent an email to them and told them who I was and what I was doing and asked them if they would be interested in getting Pockets to do the artwork for me. And I had no idea if they would be into it, but they were. I’m really pleased with the results, too.

Do you own many of Pockets’ paintings?
They actually sent me five paintings to choose from. We’ve got a lot of remixes for of the tracks; I don’t know yet when they’re going to be coming out, but hopefully we’ll use at least one of the other ones for remix releases. I thought about auctioning off the rest, the ones I don’t use, at some point for the sanctuary.

Let’s talk about Depeche Mode. The band made it into the Rock and Roll Hall of Fame last year. Was that special for you?
It’s obviously a great honor. Yeah, it’s nice to be recognized. And believe it or not, I was kind of sucked into music by the original rock & roll, the early pioneers, because that’s what my mum had in our record collection. When I was 10, that’s the music I discovered. I used to play those records to death for years and years until I left home. I think [Depeche Mode] is just about old enough to catch the coattails of it. So it’s nice to be inducted into the same Hall as all those people that are listened to so much.

What does it say to you that the Hall has started recognizing artists who play synthesizers primarily?
I think they finally decided that it’s OK to open it up to nontraditional rock-guitar bands. It’s about time. You’ve either got to move with the times, or there’ll be nobody to induct in about 50 years.

I don’t think Kraftwerk is in yet.
I think that they’ve been nominated a few times. I don’t think they’ve ever made it.

You mentioned earlier that you had other projects in the works. Is that music for Depeche Mode? What’s next for you?
Really, I think it just depends on what happens with the world. We haven’t really talked about what we’re planning next, because it just seems premature with the vaccine probably not hitting the general public until the summer. So as a band, we haven’t made other plans. I’ve just been writing, and I’ve actually been doing some writing with a friend. Again, we don’t have any plans on what we’re going to do with it; we haven’t even spoken about releases or anything like that.

If there’s one positive thing about all this, it’s that it is a nice time to just rethink and reflect and decide what you want to do. Because I think the world is going to be a different place after this.

Speaking of which, Depeche Mode’s last album, Spirit, was a rebuke of Trumpism, Brexit, and conservatism around the world. What did you learn from the band’s Global Spirit tour?
I’m just so happy that the election results came out the way they did, and this country’s managed to get rid of Trump. And I’m hoping that that’s a bit of a turning point for the world. Because it seemed like the world was being hit with doom and gloom from every angle. And if Trump had won again, I don’t think we would have been able to take it [laughs]. But let’s hope that that is a turning point. Let’s hope that that actually means something.