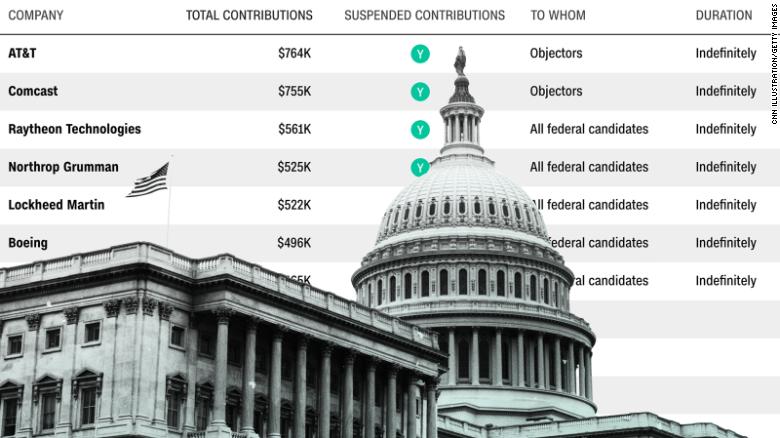 How CNN reported this project

For this project, CNN used data from the Center for Responsive Politics (CRP) listing political donations to any of the 147 Congress members who objected to certifying the 2020 Electoral College results on January 6. The data captured more than 11,000 payments by corporate political action committees (PACs) made between Jan. 1, 2019 and Dec. 31, 2020 and totaling roughly $44.5 million.

We then used the Fortune 500 list to identify 283 companies who, through their PACs, made contributions to any of the objectors. We surveyed the companies to learn more about their political contribution policies following the US Capitol riot on January 6. We excluded three companies because they had either dissolved their PAC (Campbell Soup), went bankrupt (Dean Foods) or were acquired by another company (TD Ameritrade) prior to January 6.

For each of the remaining 280 companies, whose contributions collectively totalled about $21 million, we asked:

About 150 companies responded. We then categorized the companies’ responses to build our database. When companies said they had suspended political giving but declined to say for how long, we categorized the suspensions as “indefinite.”

In some cases, companies reported different contribution amounts from those reported by CRP. In those cases, CNN has displayed totals based on data from the Federal Election Commission. These discrepancies may be due to reporting delays, since committees are not required to file their year-end reports until January 31. We have excluded negative values, which can represent returned contributions from current or previous election cycles. Accordingly, all contribution totals should be interpreted as estimates.