The week in 22 photos 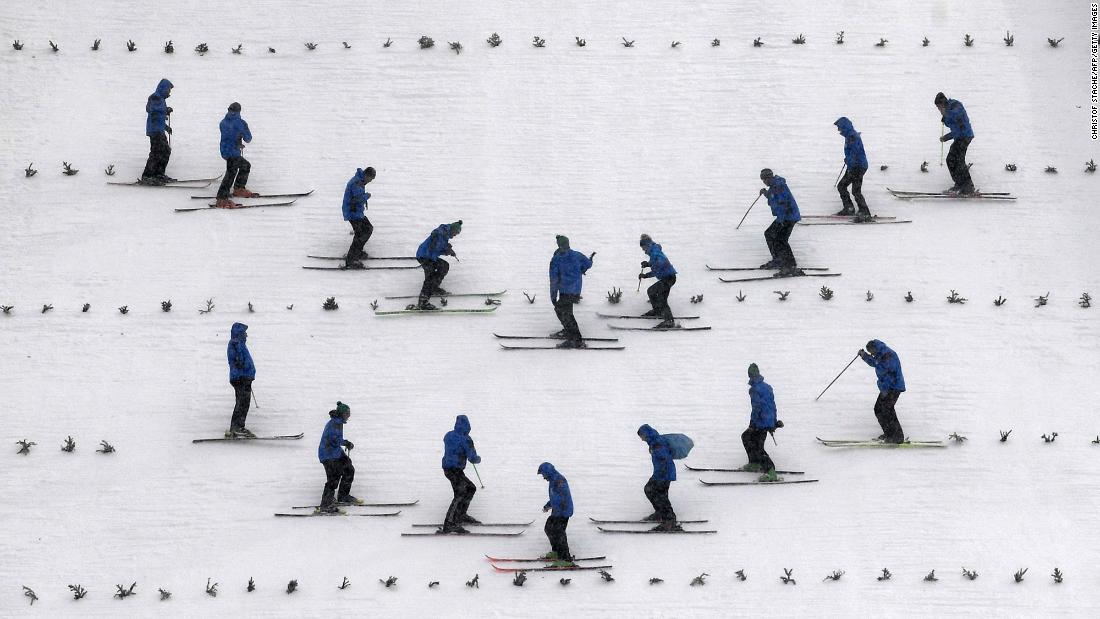 A vehicle burns following an explosion in Nashville, Tennessee, on Friday, December 25. Anthony Quinn Warner, a 63-year-old from Antioch, Tennessee, died after detonating an RV bomb in downtown Nashville, damaging more than 40 buildings and injuring at least eight people. Elliott Anderson
Health-care workers celebrate the new year in the intensive care unit at the San Filippo Neri Hospital in Rome. Antonio Masiello/Getty Images
US Senate candidates Jon Ossoff, left, and Raphael Warnock greet each other on stage at a concert rally in Stonecrest, Georgia, on Monday, December 28. The two Democrats are competing against two Republicans in runoff elections that will determine control of the Senate. Paras Griffin/Getty Images
Karissa Hill, center, is comforted by loved ones at a candlelight vigil honoring her father’s memory on Saturday, December 26. Andre Hill, 47, was fatally shot by a police officer in Columbus, Ohio, on December 22. Stephen Zenner/AFP/Getty Images

A lion attends to a cub at the DierenPark zoo in Amersfoort, Netherlands, on Wednesday, December 30. Robin Utrecht/Shutterstock

US Vice President-elect Kamala Harris thanks nurse Patricia Cummings after receiving a Covid-19 vaccine in Washington, DC, on Tuesday, December 29. Harris thanked Cummings and said she “barely felt a thing.” Jacquelyn Martin/AP
Pro-abortion-rights protesters wait outside the National Congress in Buenos Aires on Tuesday, December 29. Argentina’s Senate approved a bill Wednesday to legalize abortion. Juan Ignacio Roncoroni/EPA-EFE/Shutterstock
People run following an explosion at the airport in Aden, Yemen, on Wednesday, December 30. Several explosions hit the airport as the newly formed power-sharing government arrived from Saudi Arabia. The blasts killed at least 22 people and injured scores more, Rajeh Badi, the spokesman for the new government, told CNN. All the Cabinet members were safe, according to Yemen Prime Minister Maeen Abdulmalek. AP
Confetti falls on a mostly empty Times Square in New York on New Year’s Eve. This year, a limited live audience of first responders and essential workers and their families were allowed to watch the ball drop from a secure area. Corey Sipkin/AFP/Getty Images

Pro-democracy activists hold placards that show Chinese journalist Zhang Zhan as they march to the Chinese central government’s liaison office in Hong Kong on Monday, December 28. Zhang, an independent journalist who reported from Wuhan, China, at the height of the initial coronavirus outbreak, has been jailed for four years by a Shanghai court. She was found guilty of “picking quarrels and provoking trouble,” according to one of her defense lawyers who attended her hearing. The offense is commonly used by the Chinese government to target dissidents and human-rights activists. Zhang is the first citizen journalist known to have been sentenced for her role in reporting on the coronavirus pandemic. She is one of a number of independent reporters who have been detained or disappeared in China since the beginning of the pandemic. Kin Cheung/AP

A man in Zagreb, Croatia, walks over debris after an earthquake on Tuesday, December 29. The 6.4 magnitude earthquake, which struck about 30 miles southeast of Zagreb, could be felt across the Balkans. At least seven people were killed and dozens were injured. Antonio Bronic/Reuters
Health-care workers treat coronavirus patients at the United Memorial Medical Center in Houston on Monday, December 28. The workers wear photos of themselves so that their patients know what they look like underneath their protective equipment. Callaghan O’Hare/Reuters
A car stops where the road was swept away by a landslide in Ask, Norway, on Wednesday, December 30. Ten people were injured, one of them critically, and 11 were classified as missing after the landslide swept away more than a dozen buildings, police said. Fredrik Hagen/NTB/AFP/Getty Images

People stand in a doorway at the Good Samaritan Society assisted-living facility in Simla, Colorado, on Wednesday, December 30. Health officials believe two National Guard members who worked at the facility have a coronavirus variant that emerged in the United Kingdom in September. Michael Ciaglo/Getty Images

Migrants stretch their hands above a fire at the Lipa camp outside Bihac, Bosnia-Herzegovina, on Wednesday, December 30. Kemal Softic/AP