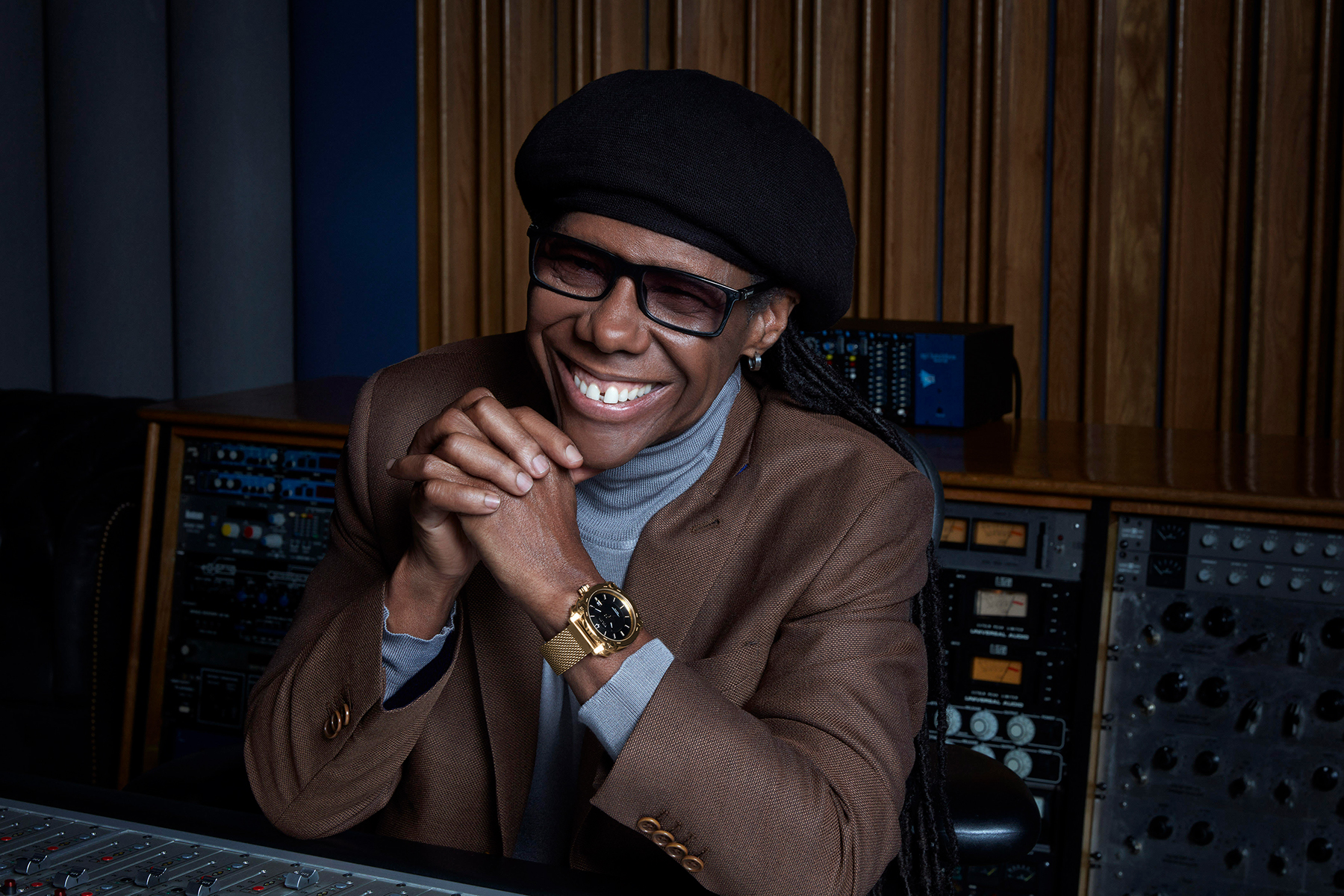 So, How Was Your 2020? is a series in which our favorite entertainers answer our questionnaire about the music, culture and memorable moments that shaped their year. We’ll be rolling these pieces out throughout December.

Ask Nile Rodgers how he’s doing on a November day in 2020 and expect to hear a high-pitched “Hooooo!” as if he were saying, “How can I even answer that?” “It’s like I can’t catch my breath, man,” he says. “This is insane.” Last year, Rolling Stone caught up with the influential guitarist, producer, and Chic bandleader to find out how the last decade had treated him; this time it’s to talk about 2020, a year that has felt like a decade, or, as he says, “It feels like a century.”

In the months since Covid protocols went into place, Rodgers has found ways to keep busy. He guested on singles by Adam Lambert and Manuel Medrano and appeared on the hit charity single “Stop Crying Your Heart Out,” alongside Lenny Kravitz, Kylie Minogue, and the woman he was supposed to be on tour with in 2020, Cher, among others. He has also been producing new music for Idina Menzel and Diana Ross.

“I think that from the time we went into lockdown until now, I’ve been involved with more records than I’ve ever been involved with in any seven- or eight-month period in my life,” he says. “Which, for me, is an extraordinary statement to make. … What’s really extraordinary is going to be the amount of music that comes out next year that I’ve been working on for the past, say, five to six months. It’s just a staggering number.”

But 2020 was not just about exciting projects; Rodgers experienced the same worries and losses felt by everyone around the world. Here’s his account of the highs and lows of 2020 and a preview of his hopes for next year.

The album I listened to the most in 2020 was:
Other than stuff that I was working on? I know people are going to say like that that was a serious, guilty pleasure, but “Old Town Road.” It was like a record like Soulja Boy, everybody dissed it, but everybody loved it. You couldn’t say that it didn’t get under your skin.

My favorite TV show to stream during quarantine was:
This has been an extraordinary year for me, for the small screen, and I don’t even know what I like the best. Everything from Marvelous Mrs. Maisel to Watchmen to Lovecraft Country to The Americans, which I know been around a long time, but I just binge watched it — amazing. I’m flipping over Ozark. I love it. Yeah. I binge watched Peaky Blinders. Loved it. There’s just so many. I haven’t seen anything that I don’t love. There’s one, Delhi Crime, and it’s about the CIA, when they gang raped the girl on the bus and she died. It’s really low production value but the content of the story is phenomenal.

The song that will define “2020” for me is:
Oof, 2020 is such a mosaic of corrosive events. Like, I can’t think of anything that defines it, but let me say this, yesterday when I was having breakfast, something hit me. For months I’ve been saying it feels like we’re living in a bad science nonfiction movie, OK? I remembered a song from my childhood called “In the Year 2525.” We went back and it was so amazing. It sounds like now, right? But they talk about, how computers will replace us, like it was just incredible. It was really spot on.

I’d define my current state of mind as:
Right now, I’m overwhelmed, but I can handle it. I think this is the way I like to be. Every morning when I wake up, I need to have a problem. And the fact that I wake up every morning now and I have multiple problems is fantastic because I can’t do anything, right? I can’t go anywhere. I was just talking to an artist and we were laughing. I said, “Since March, I’ve only seen about seven people and half of them were doctors.” It’s interesting to me, the vibe around the country when you see people on their deathbed still believing that it’s some kind of hoax and you go, “What’s wrong with people? How could you believe this is fake when you look at the entire world?” And I’ve had more than a half dozen friends die of it. My youngest brother, thank God he was asymptomatic, but he had it. And so many of my friends have been diagnosed with it and have varying degrees of feeling great. So it runs the gamut of symptoms. I know it’s heavy, but it’s impossible to not talk about that.

And this crazy political situation. Oh, Jesus Christ, what the hell is going on? Unfortunately, I’ve known the president since I was about 28 or 29. And he’s not a dude who should be president, as far as I know. He used to follow me around because my girlfriend was the crown princess of Yugoslavia and take pictures with her and say, “Hey, I was out with these guys and Russell Simmons and Puff Daddy and Mike Tyson.” And that’s the president? Like, really? Because I’m in New Yorker. So I’m from the back of the Studio 54 situation and Elaine’s and all of those kinds of clubs, where the president would frequent and try and be among the beautiful people, as they used to call that crowd in that day. So you think, “That’s the president?” Aaahhh. No, no, no, no, no.

The old-favorite album I returned to for comfort this year was:
John Coltrane’s A Love Supreme. I was looking at the Rolling Stone article last night about [my love for] A Love Supreme, and I think to myself, “How funny is that? I’ve actually listened to A Love Supreme this year probably more than any year that I’ve been a professional musician.” I must have listened to it, like, 50 times this year, if not more.

A new hobby I picked up in quarantine was:
I didn’t pick up a new one, but I picked up an old one. I bought a pair of roller skates and when they came, they had outdoor wheels, and I was like, “Whoa, no, no, no, no, no. We skate outdoors with indoor wheels because we are roller-rink skaters and we don’t change our wheels. So, no, I don’t want those heavy grip ones.” So I bought new skates, put the kind of trucks on them that I like. And then because I had a new exercise machine, I got shin splints, so I can’t skate anytime soon [laughs]. But that’s OK. It’ll be fine.

The most interesting thing I learned to cook during quarantine was:
Because we didn’t want to go to the store much, I started a garden. And I’ve been growing my own vegetables and I cannot believe I’ve become, like, 99.9 percent vegetarian. My girlfriend said to me last night, “I think you’re going to turn into an onion.” So we’ve been growing our own vegetables. And I have my assistant engineer here with me and my girlfriend. It’s just three of us. And we’ve been like locked away for nine months. So we eat food from the garden, which is incredible. And if we can’t do that, we go to farmer’s markets and that’s been cool to just cook vegetables. We’ve become vegetable-roasting connoisseurs.

Something positive that happened to me that nobody noticed was:
One of my companies just funded a charity’s annual gala. We underwrote the thing. In my own charity, the We Are Family Foundation, we’re doing things that are way beyond what we thought we’d be doing now. We launched a Youth to the Front Fund; we’re funding young people who have started organizations that are very robust and addressing problems that really need solving and they can’t get traditional funding. Banks don’t support stuff like that, so we’ve become the bank of the idealistic youth.

So I am in an optimistic mood whilst looking all the chaos. And of course, music is the thing that makes me have a huge amount of optimism because music for me, my compositions are cinematic. So I’m painting a picture of the world when I’m writing a song. So right now I’m writing for Diana Ross. I’m writing for Idina Menzel. I’m doing the Zutons’ next album, which to me, is huge because they’re coming back after 15 or 16 years so I’m having a really great time working with these artists and composing music for the future, music for the world that we want to see as opposed to the world that we’re living in right now.

The biggest hero of 2020 was:
My heart says Kamala Harris. Just winning vice president, that should be pretty damn heroic enough. The first woman? Unbelievable. Finally. And you think to yourself, “Look at other countries.” You look at Germany, England, India. You look at all these other countries that have had incredibly successful women leaders. And when I say successful, you may not have been as right-wing as Margaret Thatcher, but she held office for 11 years. She had to be doing something right for the populous.

And look how long it’s taken for America just to get a woman vice president. So I have to say that when the history books are written and all of the smoke clears, that’s going to be a very momentous moment. And I’m sorry that we never had a chance to really celebrate it like it should have been to give it the historic justice and the celebration that it deserves, because that massive. In a strange way, it’s bigger than Obama becoming president and, of course, I thought that was a day I would never see. But it’s been really difficult for women. They figured that women can run as vice presidents, but it hasn’t worked until now.

A word or phrase I never want to hear again is:
“Fake news.”

The thing I’m least looking forward to in 2021 is:
Covid.

The thing I’m most looking forward to doing when the pandemic is over is:
A live concert. Part of our live show is we invite the audience up on the stage. Like, is that ever going to happen again? Are we ever going to feel safe enough? Are we going to think every single person who is there doesn’t have a disease that can kill us just by us breathing?

My biggest hope for 2021 is:
I sound like the Beatles, but my hope is that people start to come together and that we realize that we all really want the same thing fundamentally, even though, our religions and things like that may be different.

Look, as a musician, the greatest gift I’ve ever received is the fact that I’ve written hit songs that resonate with people in every culture. I have played in almost every country that exists. And there is no feeling that can compare to doing a show in a country that doesn’t speak your language and the din between the songs is something that sounds like the bar in Star Wars, and then when your song plays, the entire place is singing it word for word in English. As soon as the song ends, we go, “We Are Family,” and it’s like a din, and we don’t understand a word [the people in the audience are saying].

We did a show the year before last, and the king of Sweden was playing air guitar with us. I was like, “This is the coolest in the world. Last year, Prince Charles was up on stage with us. And any time we play in the south of France or, of course, Monaco, Prince Albert shows up every show. It’s amazing. So our music has a reach from monarchs to like the everyday person in the street.