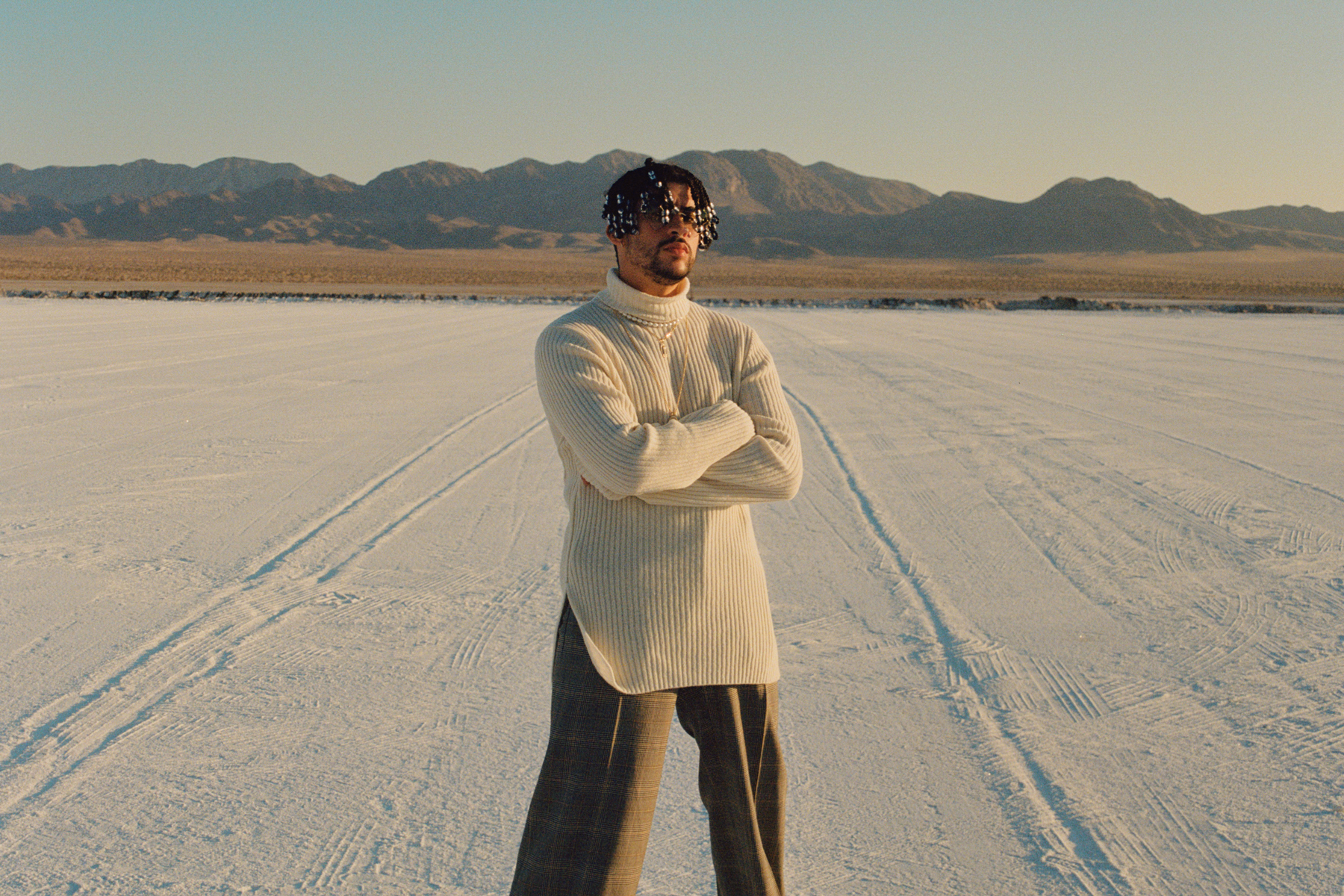 No artist had a bigger year in 2020 than Bad Bunny. In February, the Puerto Rican superstar released his acclaimed second album, YHLQMDLG, filled with nods to the old-school reggaeton he grew up listening to back home. The world shuttered shortly after that, but he still found a way to keep his career — and his fans — moving. In May, he dropped an LP of outtakes, Las Que No Iban a Salir, and in September, he came to New York for a spectacular, Covid-appropriate mobile concert, where he rode through the Bronx, Washington Heights, and Harlem on the flatbed of a truck and got a hero’s welcome. The grand finale to his year came in November, when he shared El Último Tour del Mundo, a defiant industry game-changer lit up by streaks of rock guitar.

El Último Tour del Mundo made history as the first all-Spanish-language LP to top charts such as Rolling Stone’s Top 200 Albums, and around the same time Spotify named Bad Bunny its most-streamed artist of the year. Still, music’s 26-year-old king of surprises isn’t letting those achievements go to his head. “The truth is, I enjoy [making music]; it’s what I like most,” he says in Spanish. “If there’s recognition that comes with that, it’s extra. I’m satisfied just with getting to do what I do and having people around me who listen and support my ideas. But obviously, it feels great and makes me proud.”

Your new album imagines the last tour on Earth. When the world opens up again, what are your shows going to be like?
The best in the world, the best in history — I swear that’s how I feel and what I want. Just before the pandemic and lockdown, we were getting all the details and experiences down for the next tour, and it had been incredible to see everything coming together. Now, with all that’s happened, the feeling is different. When we do finally get onstage, it’s going to be a totally new energy. It’s going to feel really special, I think, taking everything we had already planned and adding what we’re thinking about now.

If you actually had to plan your last show, what would it be like?
It would be in Puerto Rico. There’s no other place on Earth. That’s where the first one was — that’s where the last one will be.

The album shows some alt-rock influences. What kinds of bands were you into as a kid?
Honestly, I have so many, and I don’t want to name people so I don’t leave anyone out. Since I was a kid, I listened to so many styles of music. With my dad, I listened to one thing; with my mom, I listened to something else; with my grandparents, another thing; with my cousins, another. And then as you get older, sometimes you want to try completely new genres. There are way too many artists, bands, groups that have inspired me. I actually came to this conclusion the other day: Even the artists whose names I can’t remember, they’re part of my influences. All of these songs from special moments and experiences I’ve lived through have shaped what I do now.

Were you into other things associated with rock and punk growing up? The video for “Yo Visto Así,” for example, features an homage to skateboarding. Were you ever into that?
No, no, no. Zero kind of activities that require motor action whatsoever [laughs]. I can stand on a skateboard for about five seconds, and that’s it. But the attitude and the energy, I’ve definitely always identified with that.

Does that mean you were more of a quiet, artistic kid, or a showman?
I feel like I’ve always been both. My mood is unpredictable in the morning, and then at one in the afternoon, it’s totally different. I’ve always been that way.

What has it meant to you to show how you can fuse reggaeton with those rock-influenced genres?
I try to do things organically, so when it comes to thinking about that impact, I don’t know, I just try to enjoy it. I grew up listening to everything, and I love music in general. Being Puerto Rican in the Nineties, reggaeton is the music that we mostly grew up on. I’ve said it before, but it’s like we have it in our blood. Obviously I can make reggaeton, but I can also make other rhythms, other fusions, and that’s part of what I’m passionate about — creating and having no limits. There are so many rhythms in the world, and there’s so much to try still.

On the last song from YHLQMDLG, you said this new album would be your final one. Can you confirm once and for all — you’re not retiring yet, right?
Confirmed! [Laughs.] There’s still a lot to do, and you never know what’s going to happen. One day you’ll say something in an interview, and then a situation will come up where you’ll go, “Well, no, I want to retire when I’m 35.” Then when you’re 35, maybe you’ll still feel like doing a bunch of things. For now, I’m still here.

The final song on El Último Tour del Mundo is “Cantares de Navidad.” How does that song relate to Puerto Rican holiday traditions for you?
It’s a song I like a lot personally — it brings up all of these beautiful memories from my childhood, of Christmas, of my family, of my grandparents, of my grandmother. We had planned from the beginning that the album would come out on Thanksgiving, and that’s a really important time in Puerto Rico. It’s always a time when families get together. This year, I don’t know how things went because of Covid-19, but I always felt like it was kind of like the beginning of Christmas. Because I knew my album would come out that day, I wanted to give people who listen to me and support me — especially people in Puerto Rico and Puerto Ricans who are away from the island — a song that felt like a Christmas gift. It’s the last song, and it puts people in a Christmas mood so they can keep celebrating. Plus, the song is by Trio Vegabajeño, a band from the neighborhood where I’m from. The composer has the same name as me, he’s called Benito de Jesus. So it was all of these special things combined in one track.

Speaking of Christmas, what did you ask for this year?
Nothing! [Laughs.] I never ask for anything, I ask for peace and love and time to enjoy everything, for my family to be well, and for my own health so I can keep making music and reaching new goals.

The Grammys are coming up soon, and you’re nominated in two categories. How does that feel?
Oh God, I think about that kind of thing the day before. That’s how I live my life. I know what’s happening today, and that’s pretty much it. But no, of course, I’m excited and I’m proud that I’ll be able to go next year and represent.

What else do you have your eye on doing in 2021?
I spend so much time creating, and I have more plans to keep working. Outside of music, I don’t know. I need to come up with new hobbies. I don’t have a hobby that isn’t music — it’s my work, my play, my way of relaxing. I need to sit down and find some other stuff to do [laughs].