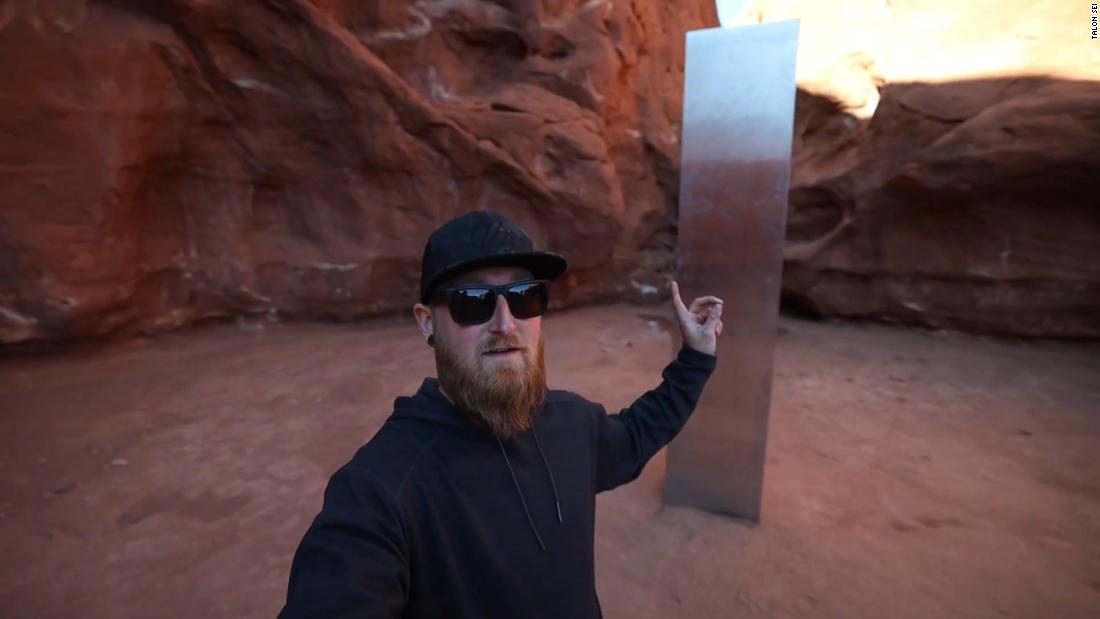 Written by By Scottie Andrew, CNN

If aliens had really been behind that mysterious monolith found in the Utah desert, they probably would’ve made it more difficult to find.
The state public safety officials who discovered it by helicopter last week have not disclosed its location, saying they don’t want curiosity seekers to become stranded in the remote landscape and need to be rescued.
But several people have already successfully located the monolith, tucked in a redrock slot canyon south of Moab. And according to three explorers who’ve made the pilgrimage, it’s easier to find than you might expect.

They say the journey wasn’t without its challenges, though. It involved driving in the darkness over rocky terrain and verifying GPS coordinates. At least one explorer got lost at first. But the trip was worth it, they said, even if the monolith wasn’t the work of aliens.

He was one of the first to find it

David Surber may have been among the very first to view the monolith in person. The coordinates to the monolith were circulating on Reddit, but none of the users could confirm they were correct. Surber volunteered to find out.

The coordinates were indeed correct, and Surber eagerly shared the results of his visit with 200 Reddit users who’d flooded his inbox. Among his findings: The monolith wasn’t magnetic or solid (he said it sounded “like a cardboard box” when he knocked on it). He also shared step-by-step instructions for the drive out to the monolith.

“At the end of the day, extraterrestrial or made through artistic expression; the monolith provided an opportunity for thousands of people to rally behind something positive again,” he told CNN in an email. “It was a good escape from all the negativity we’ve experienced in 2020.”

He got there before sunrise

Justin McBride, a YouTuber who documents his trips across the American West, did some digging on Google Earth to find the monolith’s coordinates.

With some idea of where the monolith was located, McBride and a friend set out while it was still dark to its rough location. They slept there and woke at sunrise to be among the first to reach it.

There wasn’t a trail, but McBride’s navigation was spot-on, so he and his friend found the monolith before the sun was up. But it seemed like a few other explorers had the same idea McBride did, because handprints were caked all over its metal face.

“The thing was filthy from people touching it,” he said. “I attempted to wipe it down, but it’s like the handprints were frozen to it and from a donut glaze or something.”

The monolith appears to be riveted to a metal frame likely drilled into the Utah rock — something McBride has mixed feelings about. On one hand, whoever installed the monolith there defaced public land (which is illegal, according to the Utah Department of Public Safety, whose employees found it November 18 in the helicopter flyover).

On the other, it’s a work of art that’s fascinated the internet and inspired dozens of adventurers to track it down.

This YouTuber’s journey was more dangerous

Talon Seitzinger also documented his journey to the monolith on YouTube, but his was a bit more perilous than McBride’s.

Seitzinger, known as Talon Sei on YouTube, found the monolith’s coordinates on Reddit and set off into the desert. He said the drive was about two hours from Moab.

His navigation led him to the edges of steep canyons which blocked his path, and at one point, he almost gave up. But once he righted his direction and hiked back to another path, he, too, found the monolith.

Upon closer inspection, Seitzinger said he thinks it could be a leftover movie prop or an art installation similar to the Prada Marfa, an art project designed to look like an empty designer storefront in the Texas desert.

“There have been countless shows and movies filmed out in that area so unfortunately it isn’t extraterrestrial,” he told CNN. “They got everyone’s hopes up.”

Their advice for future explorers

In his video Seitzinger told his 480,000-plus YouTube subscribers not to retrace his steps and make the trip due to the dangers he encountered. If they feel daring, though, he said he’d recommend bringing traction boards in case their car gets stuck.

The hike to the monolith wasn’t difficult, but the drive out was rocky, McBride said. He recommends going only in high-clearance four-wheel drive vehicles, like his Jeep.

But even though the hike is relatively short if you park near the monolith, it’s easy to get lost in canyons where the terrain starts to look identical, Surber said. Be aware of your surroundings and keep your GPS out in case you get turned around, he said.

Surber advised against going at night, like he and McBride did, if driving through the desert for the first time. There are frequent and steep drops in the rock, he said.

The three intrepid explorers advise fellow “2001: A Space Odyssey” fans to treat the monolith with care if they find it. Because it’s illegal to install works of art on public land without a permit, the mystifying quadrilateral could be removed soon. The Bureau of Land Management is deciding whether to investigate further, and CNN has reached out to the bureau and is waiting for comment.