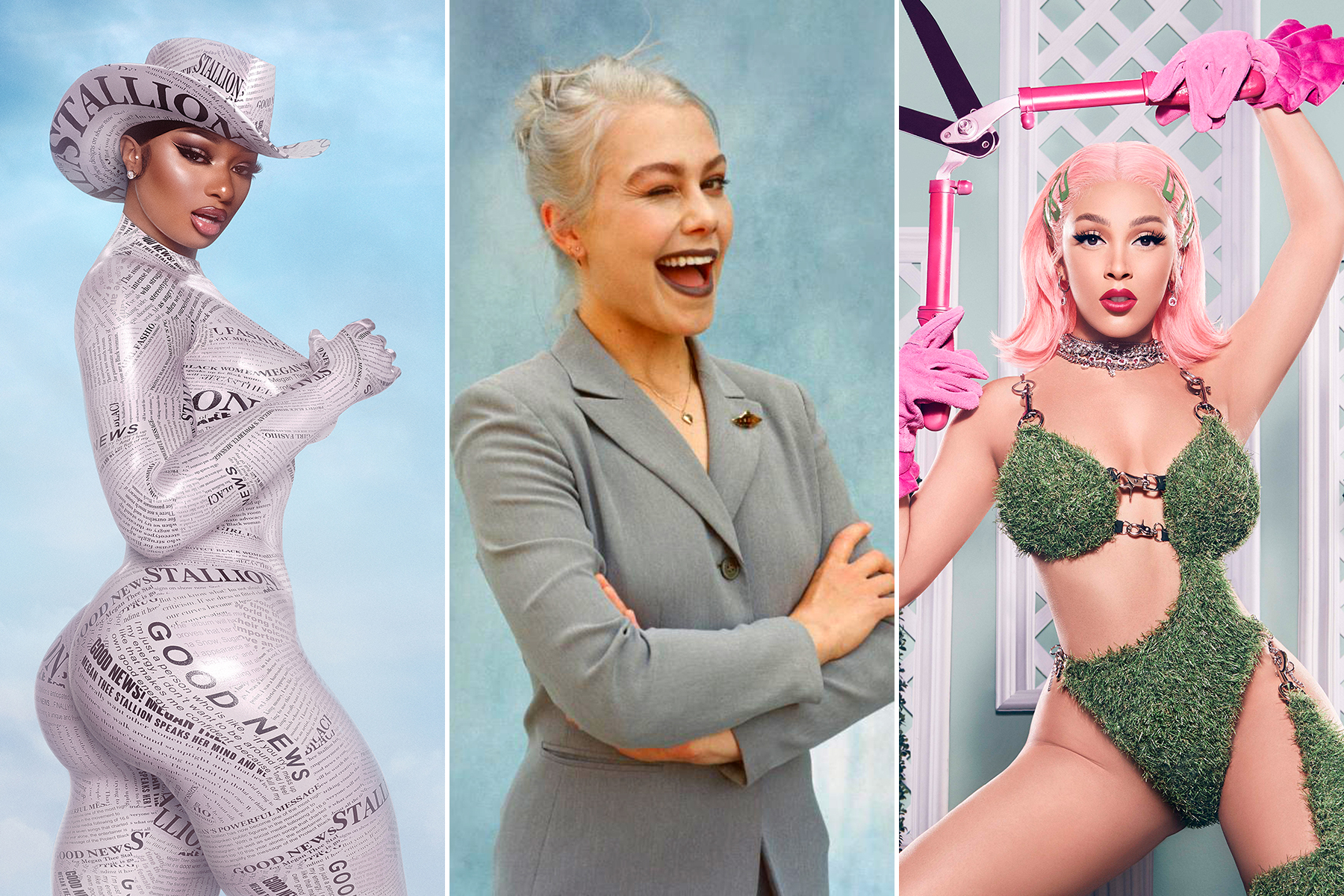 The Recording Academy announced the full list of nominees for the 63rd annual Grammy Awards on Tuesday, November 24th, and as always the Best New Artist category boasts a compelling mix of budding stars, critical favorites, and a couple of sleeper hits.

The biggest name on this year’s list is undeniably Megan Thee Stallion, and the only other artist up for the award who scored a bona fide pop hit in 2020 is Doja Cat. Indie darlings on differing ends of the musical spectrum, singer-songwriter Phoebe Bridgers and DJ-producer Kaytranada, also picked up looks, as did rising rappers D Smoke and Chika. Country singer Ingrid Andress capped off her breakout year with a nomination, as did the next generation of Cyrus family musicians, Noah Cyrus.

Each nominee has something unique to offer, and here’s a list to help you get acquainted with the musicians hoping to join that illustrious Best New Artist club. The Grammys will air January 31st, 2021, on CBS from 8 p.m. to 11:30 p.m. ET, with Trevor Noah serving as host.

Who: A Colorado native and former a cappella singer (her team competed on NBC’s The Sing-Off), Andress made it big in Nashville last year with her tender debut single “More Hearts Than Mine.” She has a country singer’s approach to songwriting with the piano-playing skills of Sara Bareilles, and her debut album, Lady Like, was one of several country-pop success stories in 2020, helping Andress land at Number 15 on Rolling Stone‘s Breakthrough 25 Chart.

The Hit(s): “More Hearts Than Mine” remains Andress’ biggest hit to date, but subsequent singles “The Stranger” and “Lady Like” also received country-radio airplay this year. Her recent cover of Dua Lipa’s “Don’t Start Now” currently has more than 2 million streams on Spotify.

Who: The 26-year-old indie singer-songwriter first captured critics’ attention with her grim, observational songwriting on 2017’s Stranger in the Alps and its lead single “Motion Sickness.” Ever since, she’s been inescapable for fans of rock and folk, collaborating with everyone from Julien Baker and Lucy Dacus (as part of the supergroup Boygenius) to Conor Oberst, the 1975, and Matt Berninger. Her latest LP, Punisher, has been hailed as one of the best albums of 2020, but what makes Bridgers really stand out is that she’s never lost her distinct, very online sense of humor. Aside from a riotous Twitter account, she recently promised to cover the Goo Goo Dolls’ “Iris” with Maggie Rogers if Joe Biden won the presidential election — and then they actually did it.

The Hit(s): Amazingly enough, that “Iris” cover cracked the Billboard Hot 100. She also released the Punisher singles “Garden Song” and “Kyoto” this year, which helped break her through on Rolling Stone‘s Artist 500 Chart.

Who: Chika has always spoken truth to power, and she’s not quitting any time soon. The 23-year-old rapper from Montgomery, Alabama, went viral in 2018 for a freestyle criticizing Kanye West’s support of Donald Trump over West’s own “Jesus Walks” beat. Shortly after releasing her debut single “No Squares,” she was invited onto Jimmy Kimmel Live by guest host Lena Waithe to perform “Richey v. Alabama,” a rap about an abortion bill in her home state and the effect it had had on a close friend. Now, with a debut EP, Industry Games, and an XXL Freshman Class induction under her belt, Chika’s activism-focused lyricism has finally earned her the attention of the Recording Academy.

The Hit(s): Along with “No Squares,” Chika has released music videos for the songs “High Rises” and “Can’t Explain It,” the latter featuring Charlie Wilson. She also was featured on the JoJo single “Sabotage.”

Read More: Chika: True to Herself, No Matter What

Who: She’s the younger sister to Miley, daughter to Billy Ray, and the most recent member of the family to embark on a music career. Noah Cyrus followed up her 2018 EP, Good Cry, this year with The End of Everything featuring the single “July,” which was later remixed by Leon Bridges. She’s also done collaborations with Lil Xan, Jimmie Allen, and London on da Track; sister Miley Cyrus jumped on the remix of “I Got So High That I Saw Jesus.”

Read More: Noah Cyrus Has Spiritual Awakening on “I Got So High That I Saw Jesus” | Noah Cyrus Details The End of Everything EP Track by Track

Who: The winner of the first season of Netflix’s hip-hop competition, Rhythm + Flow, D Smoke has made the jump from reality TV to the music industry as comfortably as anyone could. The rapper first followed up his win with an EP, Inglewood High, then last February released a new album, Black Habits, which also notched a Grammy nod for Best Rap Album. Just last month, he dropped a new single “Rapture.”

The Hit(s): One of the biggest tracks to emerge from Black Habits was “Gaspar Yanga,” a collaboration with Snoop Dogg, the video for which has garnered over 10 million views on YouTube. Other standouts from the album include the title track, featuring Jackie Gouché and “No Commas.”

Who: Doja Cat entered the pop consciousness as a meme back in 2018 when she uploaded a brilliant blast of pop absurdism, “Mooo!” — a song that’s literally about being a cow, but could’ve otherwise slotted seamlessly into any chill hip-hop playlist. The track gave a belated shot of success to the rapper-singer-producer’s debut album, Amala, which she continued to build on — and cemented this year with her smash single, “Say So,” off her 2019 album, Hot Pink. The song is also up for Record of the Year and Best Pop Solo Performance.

The Hit(s): Not only was “Say So” a hit on both the charts and TikTok, but so was its Nicki Minaj-featuring remix, which peaked at Number Two on the Rolling Stone Top 100 Songs chart back in May. For a pre-“Say So” Hot Pink hit, check out “Juicy,” while another early favorite from Doja Cat’s debut, Amala, was “Tia Tamera” featuring Rico Nasty.

Who: Kaytranada is perhaps the most unexpected addition to this year’s Best New Artist Category, and his nomination comes after a decade of steady solo releases and work for other artists. The Haitian Canadian DJ-producer got his start as Kaytradamus back in 2010, changed his name to Kaytranada a few years later, then solidified his spot as an indie favorite in 2016 with his stellar debut, 99.9%. Last year, he followed it up with the equally acclaimed Bubba, which features contributions from Pharrell, Tinashe, GoldLink, Estelle, and others. Bubba is also up for Best Dance/Electronic Album, while “10%” with Kali Uchis was nominated for Best Dance Recording.

The Hit(s): As its nomination suggests, “10%” was a definite standout from Bubba, as was “Need It,” featuring Masego and “The Worst in Me” with Tinashe. For those looking to dig into the back catalog, check out the pristine three-song run on 99.9% of “Glowed Up” with Anderson .Paak, “Breakdance Lesson N.1,” and “You’re the One” with Syd.

Who: Megan Thee Stallion probably could’ve been nominated for Best New Artist last year on the strength of her 2018 Tina Snow EP and Fever mixtape — with its breakout single, “Hot Girl Summer” — alone. But still, better late than never. In the year since Fever, Meg has only solidified her standing as one of rap’s most formidable MCs and a bona fide pop star to boot. (She also appeared on the cover of Rolling Stone.) Her four nominations — including Best New Artist and Record of the Year, Best Rap Performance and Best Rap Song for her “Savage” remix with Beyoncé — arrive on the heels of the release of her debut album, Good News. Expect that record to garner Meg a few nods at next year’s Grammys, too.

The Hit(s): Where to start? The “Savage” remix gave Megan her second Number One on the Rolling Stone Top 100 Songs chart after “Hot Girl Summer” topped it last year. Then, of course, Megan notched her second Number One of 2020 with her smash collaboration with Cardi B, “WAP.” Other recent favorites include “Girls in the Hood” and “Don’t Stop,” although don’t skimp on the classics like “Big Ole Freak” and “Cash Shit.”