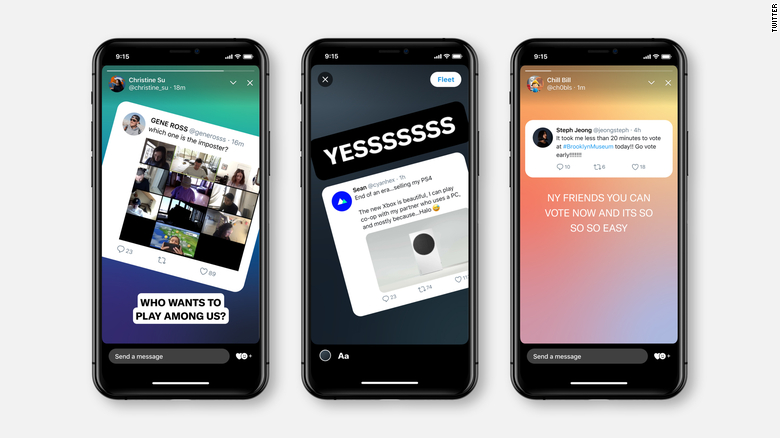 Twitter launched its own version of disappearing posts this week, called Fleets, to some fanfare (and eye rolls). But it’s had to pause the rollout as the feature has been plagued with glitches, calling into question whether the product was fully ready.

Unlike typical tweets, Fleets do not receive retweets, likes or public replies, with Twitter hoping they will reduce the pressure many people feel on social media. But ephemeral content will bring fresh challenges for Twitter, such as how it will effectively moderate misinformation, harassment and abuse on content that disappears after 24 hours.

The timing of Twitter’s launch is curious – not only because it’s adopting “stories” so many years after rivals – but also as it comes in the wake of a contentious election in the US. Ahead of the election, Twitter made several changes to its platform and created new policies to try to minimize the harmful impacts of misinformation. Though Joe Biden has been projected President-elect, that hasn’t curbed the flow of online misinformation or baseless claims of voter fraud, which are being pushed by President Trump and his allies on Twitter.

The company said it labeled about 300,000 tweets for content that was disputed or potentially misleading during a two-week period covering the election, and its aggressive efforts to provide context on such content continue.

How effectively and consistently Twitter will tackle misinformation or abuse in Fleets is an open question. Twitter spokesperson Aly Pavela said Fleets will be subject to the same rules as regular tweets. For example, if President Trump decides to Fleet misinformation, the Fleet would receive a similar fact-check label as a tweet would.

Twitter will rely on user flags to manage abuse on Fleets, as well as its automated systems. Users can report a Fleet as abusive or harmful, misleading about a political election or other civic event or say it expresses intentions of self-harm or suicide.

Extremism researcher Marc-Andre Argentino experimented with sharing a variety of misinformation and hateful content in Fleets, and most were not marked with a warning label.

For example, a Fleet that falsely said “Vaccines don’t work” and one containing an untrue conspiracy theory about Covid-19, were left untouched. Meanwhile, Argentino’s Fleet saying “5g causes covid” — another baseless conspiracy theory — had a warning before it.

The warning label said: “Some or all of the content shared in this Fleet conflicts with guidance from public health experts regarding COVID-19.” Users had to click through the warning before viewing the Fleet.

It’s unclear why Twitter took action on the latter conspiracy theory, but not the former. Twitter’s lengthy policies about Covid-19 misinformation say: “We will continue to remove demonstrably false or potentially misleading content that has the highest risk of causing harm.”

“We are always listening to feedback and working to improve Twitter to make sure it’s safe for people to contribute to the public conversation,” Pavela said. “We’ll take enforcement action against any Twitter rule violations in Fleets accordingly.”

It’s worth noting a lot of content beyond Fleets goes unmoderated on Twitter, even when it violates its rules, but because Fleets disappear so quickly, it will likely be harder for the company to take action fast enough. The company said its systems will store Fleets for a limited amount of time past their 24 hour expiration to give it more time to review user flags and potentially take action. However, by that point it would be too late to label misinformation.

There are also other concerns with Fleets raising questions about whether the product was ready to be fully rolled out. Beyond general glitches and lag, there is a loophole which allows someone to tag you in a Fleet even if you’ve blocked them, opening the door for potential harassment. (Twitter said it’s working to fix this).

Late Wednesday, Twitter said it was “slowing down” the rollout of Fleets to fix “performance and stability problems.”

When asked on a call with reporters earlier this week about how the company will approach moderation as it rolls out Fleets and tests new audio-focused features, Christine Su, senior product manager at Twitter said: “It’s really important for us to be building controls and features that people can take with them to feel more comfortable and safe as they move through the variety of spaces that we’re building.”

She added that the company is doing “a ton” behind the scenes with expanding its rules and policies to prevent abuse and harassment before it happens, although she didn’t elaborate further. “We’re going to continue to do that with every space that we’re working on,” Su said.