The Country Music Hall of Fame and Museum found the inspiration for its upcoming fundraising event from an unlikely source: penguins.

At the beginning of the pandemic, when museums and nearly everything else were forced to close down, Chicago’s Shedd Aquarium managed to create a viral moment by letting its penguins roam loose in the facility and broadcasting the shenanigans online. The penguins were early quarantine stars. Country Music Hall of Fame CEO Kyle Young was among those watching.

“They were looking at the fish swimming around,” Young recalls. “I was really taken by that, I thought it was so cool. And the Metropolitan Opera did an incredibly ambitious fundraising event in which they had their stars performing all over the world, from home.”

It’s generally short on marine life, but the Country Music Hall of Fame does happen to have the world’s greatest collection of country-music instruments and artifacts in its archives, many of which are on display during non-pandemic times. That’s the idea behind Big Night (At the Museum), an online concert and fundraiser streaming Wednesday at 9 p.m. ET on the museum’s YouTube channel that enlists a variety of country artists —  Marty Stuart, Ashley McBryde, Rodney Crowell, Tim McGraw, and Miranda Lambert — to showcase the museum’s holdings by performing with instruments once owned by greats like Loretta Lynn, Johnny Cash, and Bill Monroe.

“We’ve got the collection, it is unbelievable,” Young tells Rolling Stone. “We were able, because no one was in there, to safely get instruments out of cases and put them into artists’ hands. We thought, ‘We’ve got this opportunity that we’ll probably never have again, so why don’t we take advantage of it?’” 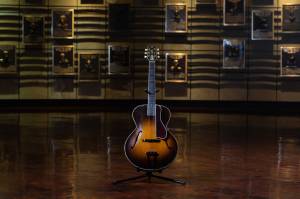 Mother Maybelle Carter’s guitar will be played by her granddaughter Carlene for the Big Night fundraiser.

Bob Delevante for the Country Music Hall of Fame and Museum*

The pre-taped performances attempted to pair an artist with an instrument that would have some significance to them, either because of an established connection (like Carlene Carter with her grandmother Maybelle’s guitar) or a clear artistic kinship. McBryde performs Loretta Lynn’s “You’re Looking at Country” with the famously outspoken Hall of Fame member’s Gibson J-50, which features a custom Formica pickguard installed by Lynn’s late husband Doolittle.

“I walked up, afraid to touch it at first, because the guy that put it on the stand has linen gloves on and I don’t,” McBryde says. “I’m terrified that my sweat is somehow going to ruin the fretboard. I said, ‘Is it weird if I smell it?’ They said, ‘Yeah, kind of.’ But I stuck my nose in the sound hole — old guitars smell like old library books.”

Given that usual museum logic is to keep hands off the artifacts, McBryde felt like she had to take extra care not to cause additional strain or damage to Lynn’s guitar.

“I play pretty hard, and I really needed to pay attention,” she says. “You can’t play that guitar too hard because you’re gonna damage that pickguard that’s already pretty fragile.”

Stuart, who pulls double duty as the event’s host, insists those instruments want to be played by skilled hands. One of his performances puts him with his first boss Lester Flatt’s acoustic guitar, alongside Ricky Skaggs on his mentor Bill Monroe’s mandolin and Alison Brown playing Earl Scruggs’ banjo. It’s a continuation of the genre’s tradition of sharing knowledge and songs, according to Stuart.

“We probably played those instruments when we were teenagers,” Stuart tells Rolling Stone. “Country music performers, you could walk up and say, ‘Could I play your guitar?’ And they’d hand it to you. Earl Scruggs, I’ve seen him hand his banjo to so many young banjo players, same with Bill Monroe’s mandolin. So to be able to go back and touch that piece of myself, it speaks to the unique relationship country music has within the family and its onlookers.”

That’s the ongoing story that the Country Music Hall of Fame and Museum tells through its assorted programming and exhibits, which include everything from Webb Pierce’s silver-dollar Pontiac to Kacey Musgraves’ glamorous stagewear.

The museum suffered big losses during the pandemic, closing down on March 13th and reopening in limited fashion to the public in mid-September. CEO Young estimates lost revenue this year exceeding $30 million, which the organization has attempted to supplant by beefing up e-commerce and online initiatives. 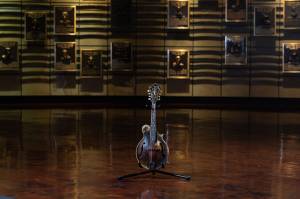 Bob Delevante for the Country Music Hall of Fame and Museum*

“We’re really well positioned because of who we are and what we do and what’s in the collection — and the brain trust there that understands the music and how it all connects — to really have a high profile digitally,” he says.

Big Night is an extension of those efforts, one that Young hopes will bring in more donations as the city’s full reopening continues to be delayed by rising numbers of Covid cases. Until that happens, fans and supporters can enjoy seeing the historic instruments doing what they do best.

“The artifacts are happy to be touched and played,” Stuart says. “The curators are happy to see those things they love on every day at work [being] used, and the people that played them were happy. Everybody wins. It inspired me, it reminded me, it informed me, and it touched my heart. All the boxes were checked off after that experience.”