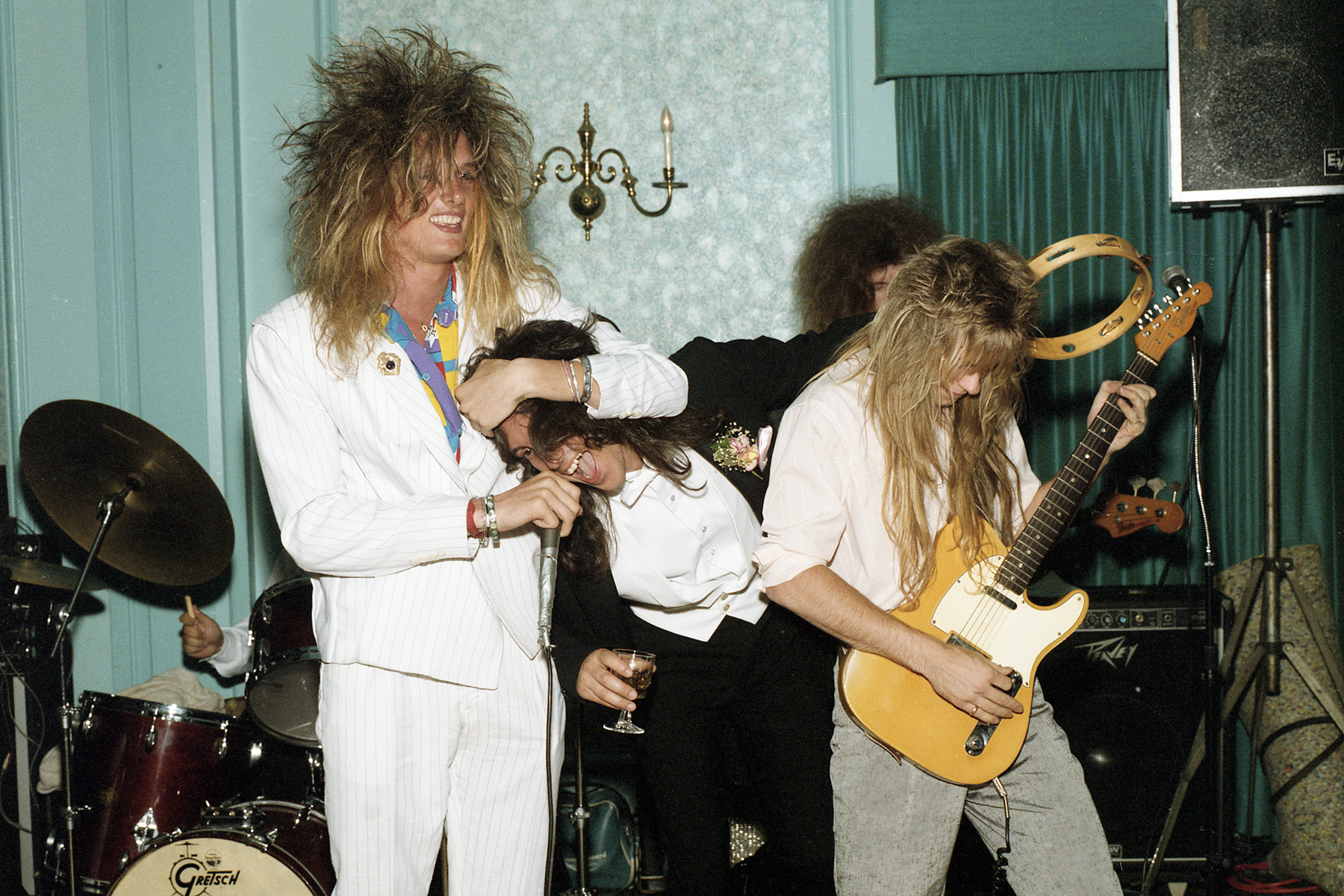 When Sebastian Bach arrived at rock photographer Mark Weiss’ wedding to sing at the reception, he knew he needed to give it his all. He was a then-unknown, 19-year-old singer with mile-high hair and a glass-shattering shriek, and by the time of the wedding — which took place in Red Bank, New Jersey on June 14th, 1987 — he’d been bouncing between hard-rock groups in Canada and the States. He’d hit it off with Weiss at a photo shoot for Bach’s band at the time, Madam X, and the photographer liked him so much, he invited him to put on his Sunday best and wow the guests, which included Stevie Van Zandt, Quiet Riot’s Kevin DuBrow, and a couple whose last name was Bongiovi and whose son was the most famous rock star on the planet at the time. Shortly after the wedding, the Bongiovis introduced Bach to Skid Row, who released their five-times platinum self-titled debut a year and a half later.

Another member of the wedding band was 20-year-old guitarist Jeffrey Wielandt, who had grown up in nearby Jackson, New Jersey. With a ceiling-scratching coif of his own, he’d spent most of his high school years burning up the fretboard in 12-hour practice sessions and playing with unsigned Jersey bands. But after Weiss’ pal Dave Feld spotted him “playing in a club with about three people in there — two heroin addicts, and a guy who worked the door,” in the guitarist’s words, Feld passed the musician’s demo to Weiss, who’d been friendly with Ozzy Osbourne since shooting him in a pink tutu for the cover of Circus. Weiss, in turn, mailed Wielandt’s demo tape to Sharon Osbourne. Before 1987 was up, the six-stringer changed his name to Zakk Wylde and became the Prince of Darkness’ right-hand man.

“Zakk was from right down the street,” Bach says. “So this was pretty crazy. I got put in Skid Row from Bon Jovi’s parents who were at this wedding, and then Zakk ended up in Ozzy’s band from the same wedding at the same time. It was a fun time to be a rock musician.”

For that one day only, Bach and Wylde played together in Weiss’ wedding band, which included Feld on drums and Madam X’s Chris Doliber on bass. Together, they played a raucous cover of Led Zeppelin’s “Rock and Roll” (premiering here for the first time) and “Whole Lotta Love,” as well as Quiet Riot’s “Metal Health” with DuBrow on vocals. Weiss recently rediscovered the video while working on his most recent book, The Decade That Rocked, which collects the iconic photos he took in the Eighties. Although Weiss is no longer with the woman he married that day, he feels the wedding video is still one for the ages.

The “Rock and Roll” clip shows Bach in a heavily shoulder-padded white tux, banging his lion’s mane to Wylde’s rendition of Jimmy Page’s boogie-woogie riff. Bach sings the tune more wildly than Robert Plant, holding his helium-high notes as long as he can. Wylde, in a white collared shirt and jeans, plays a solo that splits the difference between Page’s blues bends and Eddie Van Halen–style shred, biting his strings at the end, and by the time Weiss joins them onstage to headbang, Bach is imitating an air-raid siren, singing as high as he can.

“It was friggin’ hilarious,” Wylde recalls. “Sebastian came up to my table, and I’d never met him before. Jon Bon Jovi’s mother was there, and Sebastian’s like, ‘Oh, man, Zakk. I heard you might be playing with Ozzy.’ He goes, ‘I’m a singer, man. Maybe someday we’ll hook up whatever, man.’ And I said, ‘Ah, cool.’ Then he goes, ‘Check this out, man.’ And he starts going, ‘Woooo,’ and it just keeps getting higher and higher. And I’m waiting for all the glasses to start shattering at the table. You can see Mrs. Bon Jovi sitting there like, ‘What in the fuck is that?’ Like, everybody is trying to figure out where the noise is coming from.”

“I used to have this freak falsetto note that was so fucking loud and high that it was the same kind of pitch as Mariah Carey’s squeal that she does, that ridiculous only-dogs-can-hear-it thing,” Bach says in his already high voice. “I used to be able to fuckin’ peel the paint off the walls. It would blow my throat out, just hitting this one note. And people were like, ‘Did you fucking hear that? Do it again.’ And I’d go, ‘You guys don’t understand. It fuckin’ hurts doing this.’ They go, ‘Do it again.’ And I would do it again.”

Bach’s strongest memory of Wylde, other than the fact that he went by Jeff at the time, was that he was “a pretty boy.” “I don’t want to get my ass kicked by saying that, but he was,” the singer says, laughing. “I remember he was an incredibly talented guitar player. And he was a nice guy; he was healthy lookin’ and in shape and had long blond hair, and he didn’t have a big chain around his back, and his speaking voice was different than it is now.” Bach laughs before assuming Wylde’s gruff way of speaking. “‘What’s up, yeah, bro,’ — he didn’t talk like that, but he’s an incredible guitar player.”

Bach also remembers that when he got onstage, Quiet Riot’s vocalist had some stern words for him. “Kevin DuBrow said to me, ‘Whatever you do, don’t ask me to come up onstage. I don’t feel like jammin’,’” Bach says, laughing. “So the first fucking thing I said? ‘Ladies and gentlemen, Kevin DuBrow to the stage.’ And he walked up, ‘You fuckin’ motherfucker!’ And he’s drippin’ in sweat, but we had fun.”

Weiss will premiere the footage of DuBrow, Bach, and Wylde performing “Metal Health” on Friday during a virtual pay-per-view event dubbed Welcome to My Exhibition. The stream will raise money for New Jersey’s Monmouth Museum, which has hosted an exhibition of Weiss’ photography this year. Guests during the broadcast will include Wylde, Dee Snider, Lita Ford, Yngwie Malmsteen, and Ratt’s Stephen Pearcy, among others. Weiss is also hosting a charity auction, featuring autographed photos, to benefit the museum. In addition to the livestream and auction, Weiss has also been working on The Decade That Rocked Podcast, an upcoming line of apparel and skateboards featuring his pictures, and a sitcom, The Weissguy.

When the wedding performance was done, Weiss told Bach that he had impressed Jon Bon Jovi’s parents, and Bach sat down with them again at the table. He hit it off with Papa Bongiovi, talking about their favorite songs on Bon Jovi’s Slippery When Wet (Bach’s was “Let It Rock” and John Bongiovi, Sr.’s was “Never Say Goodbye”), and Bongiovi mentioned that his son had a guitarist friend who needed a singer. “I sent them a tape and a picture, and they flew me down there to Newark not long after that, and we started the band,” Bach says. “People say, ‘Oh, Skid Row is an overnight success.’ And I always have to tell them, ‘It took at least two weeks.’” Bach erupts into laughter. “Sorry if you’ve heard that one before.”

“Sebastian was the missing puzzle piece for Skid Row,” Wylde says. “I remember Dave Feld was like, why don’t we hook him up with [Skid Row’s] Davey [Sabo] and Rachel [Bolan] and the fellas? And the rest is history right there.”

“We didn’t know if there was going to be a big moment for us,” Bach says, looking back at his and Wylde’s early days. “We were just kids, having fun, playing rock & roll, and drinking Jack.”